Some intrepid bloggers are participating in Amy Johnson Crow’s 2018 “52 Ancestors in 52 Weeks” blogging prompt. Fellow Australian blogger Lilian Magill realised that this might just over commit her so she came up with “12 Ancestors in 12 Months” and I thought this was a great idea. Lilian is posting about ancestors in the month they were born. Sadly my relatives were not so co-operative and have their birth months mostly all huddled together in the latter half of the year. Therefore my posts will be about ancestors for whom I have enough things to say and images to make the post interesting.

First up for January is George Oliver Jackel. Born on the 14th August 1891 in Berwick, Victoria, the first child of James Herman Jackel and Louisa (nee Johns),  George was actually registered as Oliver George Jackel but was always known as George. George’s father James was born in Harkaway, Victoria in 1863. He came from Prussian stock but rather than continuing his Lutheran faith, converted to the Church of Christ. If you have ever sat in on Sunday services of both these churches you will realise not much actually separates them. George’s mother Louisa was born in Monkey Gully, Sebastapol in 1862, also the first child of her Welsh born parents. 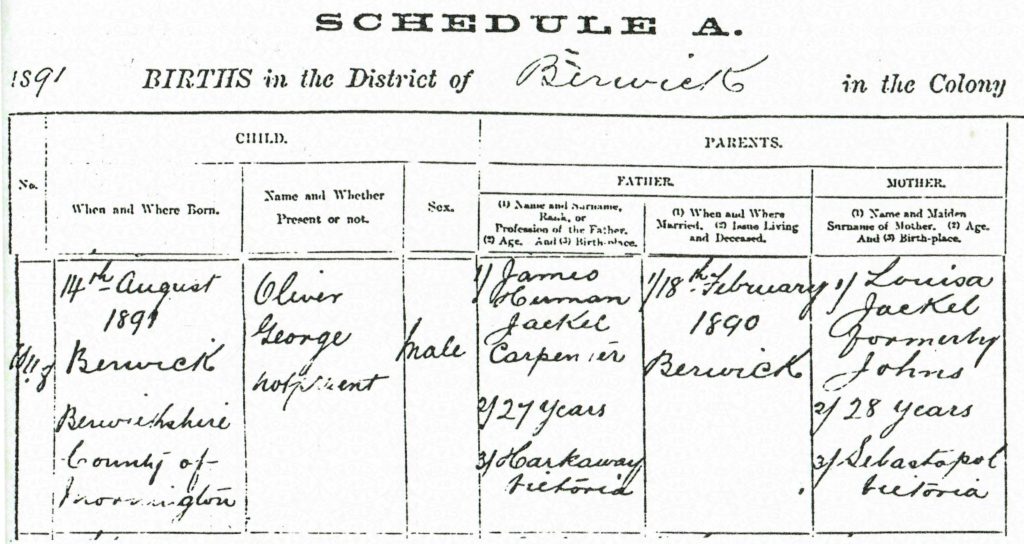 Birth registration of George using his official name of George Oliver. This was also the arrangement of names when his death was registered.

George had brothers Horace James (1895-1965), Aubrey Lewis (1897-1921), Baden Allan (1900-1992), Cecil William (1902-1978) and Wallace Edgar (1904-1983), and one sister, Ethel May (1893-1968). By 1906 the family had moved from Berwick to Taradale where James took up beekeeping in preference to carpentry, although he went back to building at various times. James was a committed Church of Christ man – fanatical in fact – but to tell some of those stories now would spoil the fun later on. Needless to say all the children of James and Louisa grew up as staunch Church of Christ people. But they weren’t just church goers. Most of the boys became lay preachers, missionaries or ministers in the church, in addition to also being beekeepers. George also took up beekeeping and is first listed in a directory as such, at Taradale South in 1914 when he was 23 years old.

In September 1915, in the Church of Christ at Taradale, George wed Olive Isabella Cordy, the 20 year old daughter of Enos Cordy and Annie Elizabeth (nee Legg).

At the Church of Christ, Taradale, on Wednesday, 22nd inst., a very pretty wedding was celebrated. Mr. Clipstone officiating. The contracting parties were Miss Ollie Cordy, eldest daughter of Mr E. Cordy. and Mr. George, eldest son of Mr and Mrs Jas. Jackel, of South Taradale. The bride was attended by her sister, Miss Eva Cordy, and Miss Wiseman as bridesmaids. Mr J. Jackel acted as bestman. The bride, who looked very charming, was robed in cream silk, trimmed with lace, and wore a white tagel hat with lancer plumes, and carried a beatuiful bouquet of carnation and asparagus fern. The bridesmaids wore white embroidered muslin gowns. The organist played the Wedding March as the happy couple left the church. After the ceremony an adjournment was made to the residence of the bride’s father, where the wedding breakfast was partaken of, and a happy time spent. The guests included only near relatives of the bride and bridegroom. The young couple left during the afternoon on a secret honeymoon, and carrying with them the best wishes of the residents of Taradale and district.

I’m sure this was a hasty affair as less than 15 weeks later Olive presented George with a son whom they named Lloyd Oliver. I would love to know if any wedding photos survive as  I have none of them together when they were young.

By early 1917 George was beekeeping in partnership with his uncle Edmund Jackel, but he had bigger plans. The young family moved to Wangaratta probably just before catastrophic floods hit the region in June 1917. I have been told they lived in O’Keefe Street before the floods. I’m not sure if this means that this is where they were flooded out, but the only O’Keefe Road I could find is at Boorhaman and is too far out of town for the description I was given. I was told by my great uncle Albert Edgar Moore, that the family were living  in a cottage between Kett and Morgan Streets on Parfitt Road (near where West City Autos were in 1999). Olive and her younger sister Agnes, then aged only 12 and a half years, were taken out of the house in a boat when the water was higher than the fences. Agnes remembered chooks sitting on the tops of fences. The family are not specifically mentioned in newspaper reports as so many people were affected but I remember being shown a wardrobe by my great grandmother Olive, who pointed out the high water mark in the timber. I am guessing that it was at least 180cm high. At the time of the flood Olive was also seven months pregnant.

By July 1917 it seems that the family had already bounced back from the devastating flood. George was again recorded as being a beekeeper, and made news as an early purchaser of a Ford motor car in Wangaratta. Business must have been booming as George was still only 26 years old and was about to be presented with his second son, Ivan Keith Jackel, four days after his own birthday. Later in 1917 or early 1918 the Jackels moved into their new home in Swan Street named ‘El Bethel’, just opposite Templeton Street. I have a piece of furniture with their surname and 1917 chalked on the bottom. I presume it was the date of manufacture and was intended for the new house. In this house George and Olive had three more boys – Lyle Kevin (known as Kevin), Aubrey Lewis and Athol Stuart. 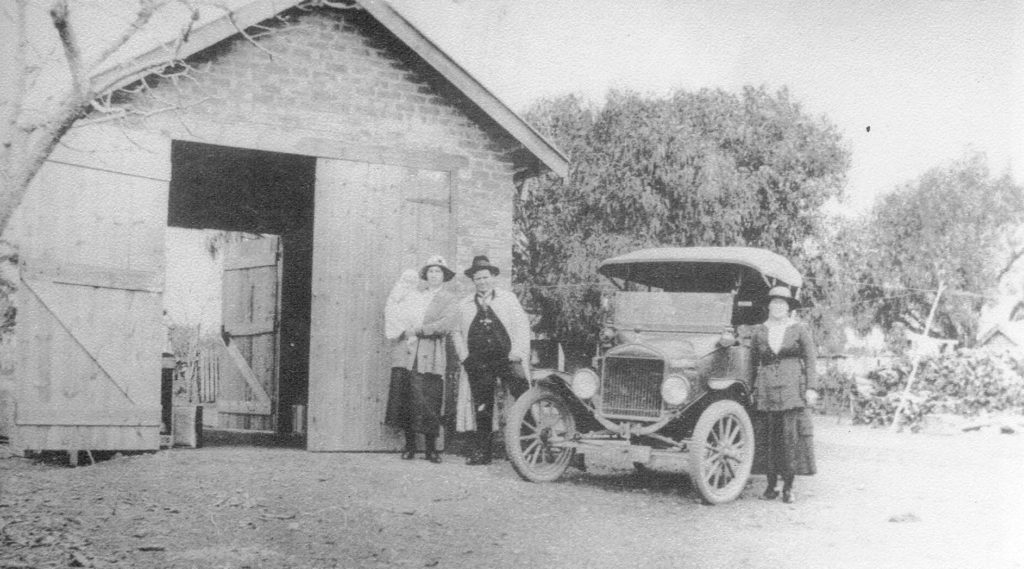 George Jackel with Olive, supposedly holding Aubrey aged 6 months, and Mrs Percy Dodsworth on the right, taken at the rear of ‘El Bethel’, circa October 1921. Eagle eyes will note the post and rope type clothes line. Olive still had this type of line in the 1970s.

Family stories have it that George and Olive moved to Wangaratta in a type of missionary endeavour to begin the Church of Christ. I do have many early images of church meetings that were held at ‘El Bethel’. This house was originally numbered 133 Swan Street, but after renumbering around the 1960s the house number was 117-119 Swan Street. I also have stories from family members who said that early church services were held in their home, and that George was instrumental in having the first resident minister installed. I don’t want to go off track too much as I am planning a story of the Church of Christ in Wangaratta as several separate posts. George did continue his commitment to the church, being Vice President of the North Eastern and Riverina Churches of Christ in at least 1930. He must also have had some standing in the community as he nominated for the local council in at least 1932 and 1939. 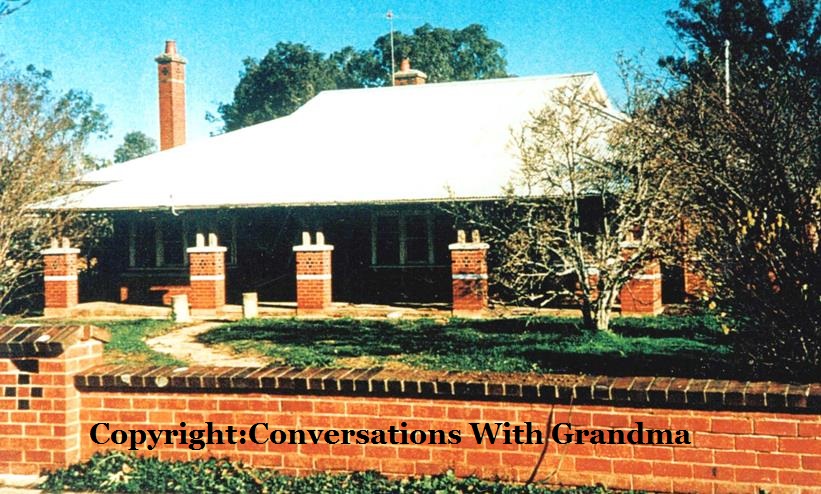 The block that ‘El Bethel’ was built on was originally a large one, stretching along Swan Street to past Olive Street, which was named for George’s wife Olive. This land was slowly subdivided as the five sons of George and Olive married and needed their own home. As a result, the oldest son Lloyd, and his adorable wife, known to me as Aunty Maude, had a house built directly next to ‘El Bethel’. My grandparents Alma and Ivan Jackel had the next block which was 123 Swan Street. A footpath at the back of the houses of Lloyd and Ivan connected them and led to ‘El Bethel’. While my grandmother Alma enjoyed having her dear friend and sister-in-law Maude visit, she was much less enthusiastic about sudden visits from her bombastic mother-in-law who would fling the back door open and march in without any notice. I witnessed this on many occasions. Knocking, or considering that she was entering someone else’s home just didn’t enter Olive’s mind. Athol was another son who took a block in Olive Street that backed on to my grandparent’s block down near the One Mile Creek, and Kevin moved out to Williams Road. My research hasn’t uncovered the entire story of the land dealings of George Jackel so that will have to wait for another post.

George also continued to be a successful apiarist while at Wangaratta.  He used a mobile extraction plant to remove honey on site, rather than bringing hives home to a permanent plant. He exhibited regularly at shows and attended apiary conferences around the state, and was for several years President of the Victorian Apiarists Association. In 1928 the Argus commented on the honey season.

REMARKABLE HONEY FLOW.
Heavy Yields at Wangaratta.
WANGARATTA. Sunday.-There is a remarkable flow of honey in this district, and hives are being filled in eight days after having been cleared. The flow, which will last for three to four weeks, has been brought about by an unusual blooming of redgums. The yellow jack thistle will not yield much this year, and will be followed by a light autumn flowering of box trees. About 600 hives are scattered round the town, and there are hundreds more throughout the district. Mr. George Jackel, a leading apiarist, is collecting up to two tons of honey a day. One morning this week six men took out 41 tins, at the rate of more than 10 tins an hour.

I never met George, my great grandfather. He passed away on the 5th December 1949 at Footscray at the young age of 58 years. Family members told me with some bitterness that Olive pushed him into travelling to Melbourne to see her relatives in Footscray and to go Christmas shopping in the posh Melbourne shops, and he subsequently died suddenly from a heart attack. George had suffered from hypertension for five years, and survived a heart attack earlier in the year. George’s name lives on in the family with some affection. He is remembered as an affable and loveable man. Growing up he was widely known in the family as “Pa” and I also grew up knowing him as exactly that. 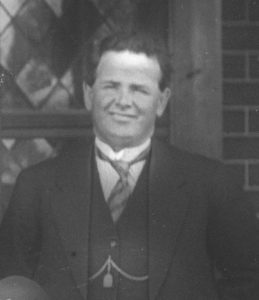 George Oliver Jackel, circa 1926, on the verandah of ‘El Bethel’ 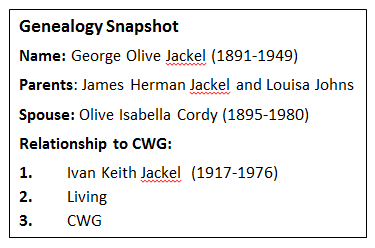