A Whirlpool of Profligacy

Fear not dear reader! This is not another post about riots and debauchery in the good town of Wangaratta. In fact, this story lauds the gentility and culture of early 1870s Wangaratta.

The opening hours of the town’s Athenaeum was the subject of a letter to the Melbourne based newspaper The Argus in December 1873. The writer, using the nom de plume ‘Delta‘  evidently wished to embarrass the Melbourne Public Library Trustees by pointing out that a country town had more liberal opening hours for their institution of learning than did the metropolis. Possibly the writer also wished to suggest that Wangaratta itself was on a higher moral and intellectual plane than Melbourne. The ensuing response shed light on the success of the widespread movement to provide Mechanics’ Institutes and Athenaea as centres of enlightenment and civilisation for the masses.

OPENING OF THE LIBRARY AND MUSEUM ON SUNDAY.
TO THE EDITOR OF THE ARGUS.
Sir, — It is not often that a country town takes precedence of a metropolis in affording facilities for moral and intellectual improvement. Wangaratta, however, occupies this enviable position. In Melbourne, the
Public Library, Picture Gallery, and Museum are kept rigidly closed on Sunday, while in Wangaratta our local Athenaeum is thrown open during the entire day. Partial opening from 2 to 10 p.m. was tried some 10 years ago, and continued to the present year with such gratifying results that when, at our annual meeting in August last, it was proposed ” that the Athenaeum be kept open from 9 a.m. till 10 p.m., as on other days,” the motion passed without a dissentient voice.
Will the Melbourne Public Library trustees go and do likewise? — Yours, &c. DELTA

This seemingly innocuous letter was met with a robust response from the Australasian newspaper. Perhaps it was the rivalry between the two newspapers, or a bored journalist with a penchant for satire and attention grabbing headlines, but the Australasian published a scathing and almost hysterical attack on The Argus and ‘Delta’ as if they had complained of the Sunday openings. Curiously, in doing so, they supported not only Wangaratta’s institution but also ‘Delta’ and the point he/she actually made that Sunday openings of the Wangaratta Athenaeum was seen as progressive and valuable.

” We may be prepared to hear that in this unhappy town vice advances with giant strides, and that it is rapidly becoming a whirlpool of profligacy. All the barriers of social order have been broken down, and the fences of virtue and religion trampled under foot. To put the enormity of the case in the fewest possible words, the Sabbath is desecrated by the local Athenaeum being opened every Sunday. It is distressing to read the letter of a correspondent of the Argus, who states that the institution has been opened on Sunday afternoons for about ten years, and this state of things has been attended ‘with such gratifying results’-his very words -that it was lately resolved, ‘ without a dissentient voice,’ that it should be kept open on Sunday during the same hours as on other days. It is evident that this procedure strikes at the very foundation of public and private morality, and that the gratifying results referred to only add to its danger and wickedness. Because, if the opening of the Athenaeum on Sundays were the cause of drunkenness and disorder, this would tend to discredit the movement, and thus, by a circuitous route, good might be evolved out of evil. But now, when it only gives opportunity of rational study and enlightenment, and culture to many people who without this resource might be driven to the taproom, or perhaps to church, from the sheer inability of otherwise disposing of their time, it is evident that all our social and religious qualities are attacked in the most insidious manner.  Certainly there must be another side to this statement. The place must be becoming another Sodom or Gomorrah, upon which the vengeance of heaven cannot be always delayed. There must be some fearful per contra to this account. Were it otherwise, it would seem that we might adopt a similar course in Melbourne-throw open our Public Library, Picture Gallery, and National Museum on Sunday, to be the same sources of elevated recreation and instructive amusement on that day as on other days. But we have the assurance of a good many people, who profess to know a good deal about it, that such a course would be to open the flood gates of Communism, atheism, free thinking, and many other dire agencies, and to precipitate some frightful catastrophe. Under these circumstances, perhaps, it is better to wait, and take warning and comfort from the fate which many very positive persons doubtless feel assured must be impending over the intrepid town of Wangaratta. “ 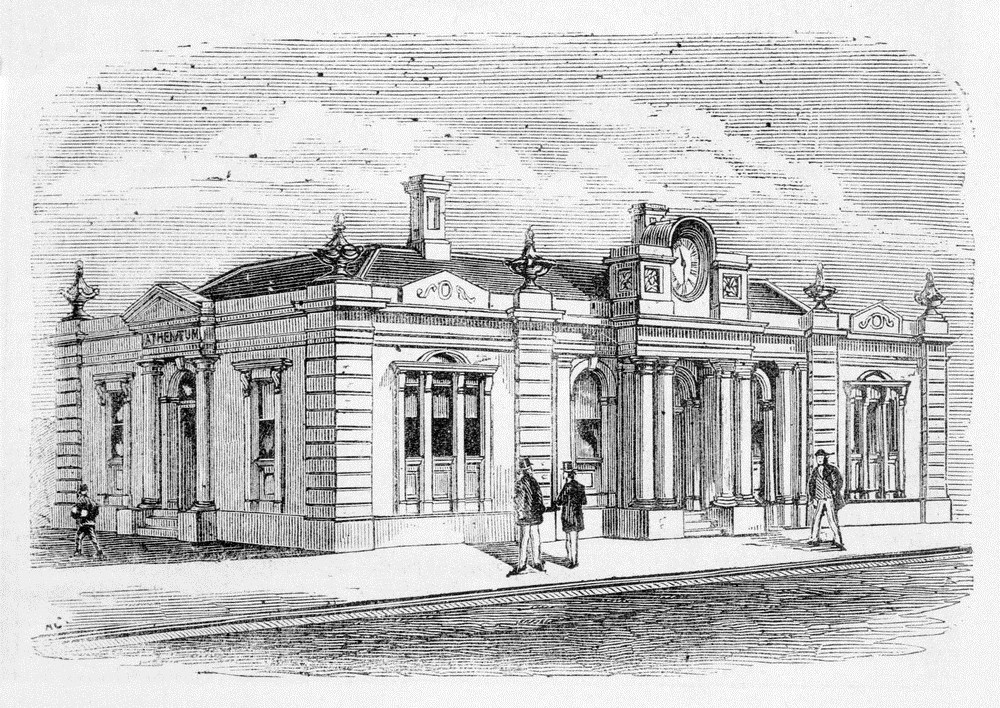