As we saw in Part 5 of this series, Ada Cambridge remarked on the egalitarian nature of early 1870s Wangaratta society, and mentioned a few friends who were from the “tradesfolk” class. After recalling the wife of a stationer – identified as Anne Bickerton (nee McCallum), and the wife of a general storekeeper – most likely Mary Sarah Thomas (nee Hughes), Ada went on:

… and the wife of a chemist with whom I was in particular sympathy at the time. We sewed baby clothes together , she and I, and the wearers of them arrived in this world within an hour of each other.

The “wife of a chemist” was in this case Sarah Rundle (nee Bulmer). Ada’s recollection was not quite correct as her son was born on 3rd May 1870, while Sarah Rundle’s daughter Ena Florence was born on the 20th May 1870*. Sarah Rundle was born in Goulburn, New South Wales in 1843 to builder Joseph Bulmer and his wife Catherine Merriman.

My beloved first-born died at five years old, his birth-mate at about twelve, I think. The gate by which he left seemed awful enough, but the passing of the poor little girl was too dreadful for words.

Ada’s son Arthur died from scarlet fever but he was not quite five years old, being a little more than three weeks form that milestone. Ada did have a second child, Edith Constance, but she had died in August 1874 at Yackandandah, aged 10 months.

The passing of Sarah Rundle’s young daughter Ena in June 1881 was indeed a tragedy, one which rocked the community and was widely reported, not only because of the death of Ena but also the two adults – Dr Angus Munro and his sister Isabella – who perished with her. No doubt, far away, and perhaps years since she had seen her friend Sarah Rundle, Ada Cambridge was deeply affected. 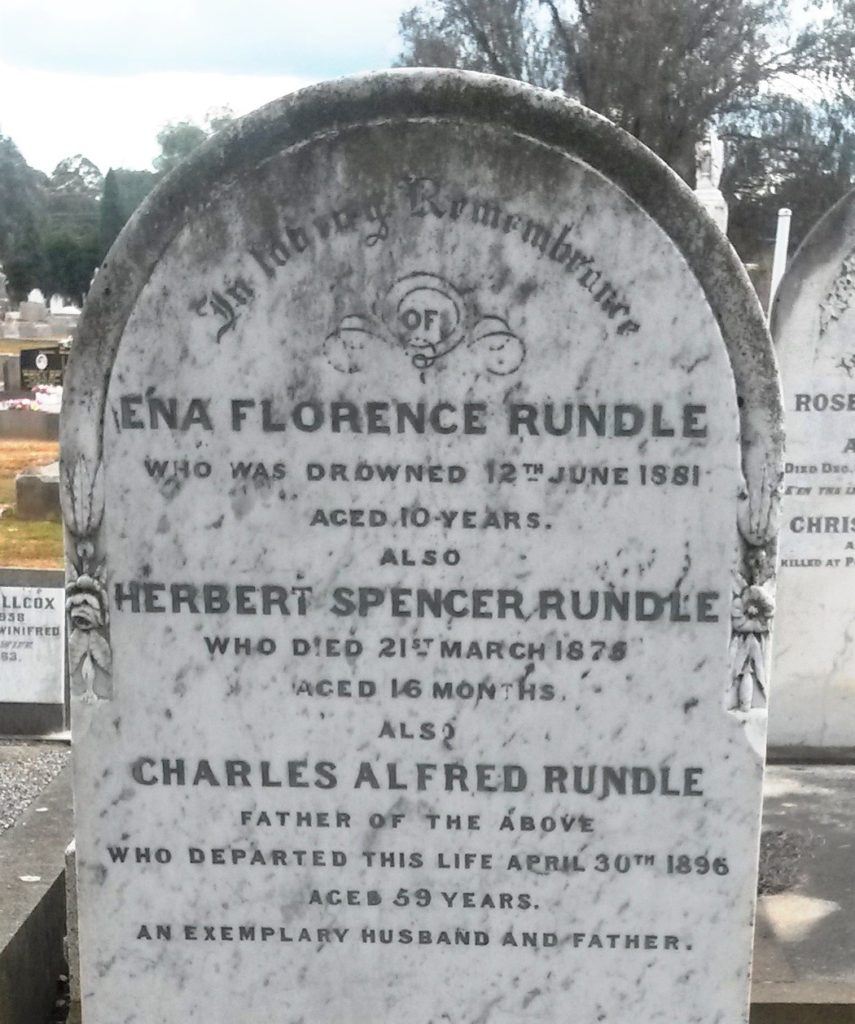 Headstone of Ena Rundle at Wangaratta cemetery. Note that Ena’s brother Herbert died before her, but it seems that her death prompted the family headstone, copyright author’s collection.

A magisterial enquiry was held this evening before Mr A. Tone, J. P., when the following Evidence was adduced:

C. A. Rundle deposed to recollecting Dr Angus Munro calling at his place on Sunday afternoon, to take his daughter, Ena Florence Rundle, out for a drive, in company with the doctor’s sister, Miss Munro. Did not see her again until about eleven o’clock on Monday morning, when he saw her body lying in some blankets near the Yellow Creek. The child was ten years old on the 12th ult. The company with Mr C. Chandler endeavored to restore her animation for about three-quarters of an hour, but was unsuccessful in doing so. Had been informed by Mr Chandler that the child had been seen alive by a lad clinging to a stump in the creek some time previous. When the body was recovered it was cold, but limp.

Hopton Nolan deposed: Am a publican residing at Tarrawingee. Have seen the bodies of Dr Angus Munro, Miss Munro and Ena Florence Rundle, lying at Mr Rundle’s house. Last saw them alive about 4 o’clock on Sunday evening. They called at my place, but did not remain long …

Robert Tutty deposed: Reside at North Wangaratta. Recollect riding across the flats on Monday morning about 9 o’clock, towards the Yellow Creek. Intended to cross the creek, but on finding I could not do so, I was about to return home when my attention was attracted by what appeared to be a child’s arm on a stump in the centre of the creek. The head was underneath the water, and the child was apparently dead. I rode at once to Cleary Chandler, who was working in a paddock some distance away, and told him what I saw. I then rode away to tell the police, but meeting Robert McCormick on the road, and telling him what I had seen, he went and told the police. Saw the body of the child afterwards. When I saw Cleary Chandler I told him there was a cart capsized in the creek, and that somebody was drowned. Do not recollect telling him that I heard somebody crying for help. If I had said so, it was incorrect. Did not notice the horse and buggy in the creek at the time. I saw wheel tracks going into the creek, and from that inferred that a cart of some kind had capsized. Saw the body of Dr Munro taken out of the water. It was about 100 yards from where I saw the child clinging. It was about 3 yards distant from the edge of the water to the stump where I saw the child. Did not make any attempt to recover the body before I went for assistance. Have no idea of the depth of the water where the child was. Can swim a little, but am not a good swimmer.

Andrew Munro deposed: Am father of the deceased Angus Munro and Isabella Munro. Angus was 28 and Isabella 25 years of age. Saw the bodies now lying at Mr Rundle’s and recognise them as my son and daughter. Saw my daughter’s body taken out of the water.

Cleary Chandler deposed: Am a farmer residing at Carraragarmungee. From what I was told by Robert Tutty on Monday morning, I concluded there was some person in the Yellow Creek crying for help. I went to the creek and cooeyed, but received no answer. “When I went down to the creek I saw a buggy and horse in the water. The horse was dead. On going further down the creek I observed the body caught in some saplings. 1 recovered it, and identified it as that of a daughter of Mr Rundle’s. The body was limp. It was about ten minutes between the time I arrived at the creek after I was told by Tutty. Was present when the body of Dr Munro was recovered, but did not find it myself. It was about 100 yards above where the child was found. When Tutty came to me, he told me he saw an arm clinging to a stump, and heard somebody crying for help.

Charles Alexander Williams deposed: Am a constable stationed at Wangaratta. -Was informed by a man named Robert McCormick on Monday morning, about 10 o’clock, that some person had been drowned in a creek near the Ovens River. Went to the place indicated, and saw the last witness on the opposite side of the creek, with the body of a child. He pointed out the horse and the trap in the creek, and I came to the conclusion that there must be somebody else in the water. Some time afterwards the body of a man, who was identified as Dr Munro, was discovered on some snags in the creek. It was taken out, and was in a nude state. His clothes were found on the bank of the creek, about 100 yards above where the body was found. Also saw marks on the mud where the deceased had come out and plunged in again. There were feet and finger marks, and he had evidently come out of the water and went in again. The body was naked, with the exception of a guernsey.

Lawrence John Keighan, a mounted-constable stationed at Wangaratta, also gave evidence as to the finding of the body of Miss Munro, at 2 o’clock the previous afternoon. It was about six yards from where the buggy was found, quite close to the bank, and at the bottom of the creek. The buggy was found about 80 yards below where the finger marks were discovered.

Mr Tone here called Robert Tutty, and informed him (the “Wangaratta Dispatch ” states) that an impression prevailed before the inquiry — with which he (Mr Tone) had himself been impressed — that the girl Ena Rundle -was alive when discovered by him ; but from the evidence he was convinced that such was not the case, which freed Tutty of the stigma of cowardice which might otherwise attach to him. The magistrate then found that Angus Munro, Isabella Munro, and Ena Florence Rundle had been accidentally drowned in attempting to cross the back water from the Ovens River.

When she died in December 1918 Sarah Rundle was remembered as a pleasant and capable businesswoman and an uncommonly educated woman. After her husband Charles Alfred died in April 1896, she was left with the family pharmacy business, and six surviving children, the youngest aged nine years. “In the social and public life of Wangaratta deceased was very prominent, and she was the founder of the plain and fancy needlework section of the Wangaratta show which was developed under her management.” “Both in business and in private life, Mrs Rundle’s pleasant and genial manner, coupled with her generous nature, gained her the goodwill of the people. She did much in the early days to advance the interests of the town, and the fine row of buildings in Murphy street, known as ‘Rundle’s Buildings,’ were erected by her, showing that she had faith in the future of the town in which she had spent so many years in business.” The Chiltern Standard, where Charles Rundle first started his business, recalled that in Wangaratta “the chemist’s business conducted by her husband, the late Mr A. C. Rundle, and in which she assisted by virtue of her qualifications in chemistry, was for many years one of the leading institutions of the district.” 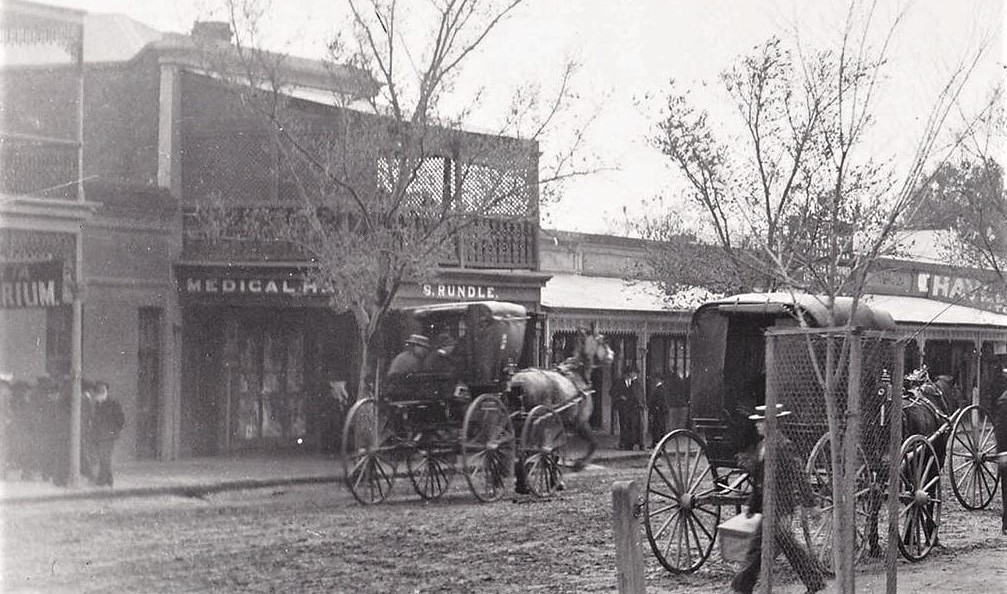 In Part 7 of this series we will see Ada Cambridge deal with the attitude of working class townsfolk towards religious representatives, and take a quick look at benevolence in Wangaratta.

* Ena Rundle’s birthdate was recorded as the 20th May 1871 on a newspaper birth notice, and as 12th May 1871 by her father at the enquiry into her death.

**All quotes from Ada Cambridge in this series of posts are from Thirty Years in Australia, available from the Hathi Trust Digital Library https://hdl.handle.net/2027/uc1.$b566133. This post refers to pages 40-42.