An Exemplary Wife and a Fond Mother

Trying to tease out the lives of women is often difficult. In generations past married women were seen as an extension of their husbands. Single women were seen as extensions of their father, or recognised only if their charitable work was extensive, or worse still – were invisible. Women left few footprints in documents or in life in general that extended beyond their lifetime. As a result, their own personalities and lives were often unacknowledged and thus lost to history. Obituaries were often written in terms of the achievements or status of their spouse or father. Alternately women’s lives were summarised by their domestic achievements. The title of this post, “An Exemplary Wife and a Fond Mother” is a quote from the obituary of my great grandmother Caroline Ann Moore (nee Ritchie). I don’t however, object to it, as Caroline may have seen her own life in the same terms – that her role was as a mother and wife. I expect also that she would have been proud of the accolades that the obituary gave, particularly that her children were well regarded.

Caroline’s obituary is a little different to some as it doesn’t make much mention of her husband James Edgar (Gordon) Moore although he was a well known shopkeeper and sportsman, and was involved in community organisations such as the fire brigade. Was he not as well liked, or was Caroline well known and liked enough to warrant an obituary focused on her?

She was an exemplary wife and a fond mother, her fine character showing out in the training of her family.

The mention of Caroline’s children is also interesting given their youth. Albert Edgar (Bert) was 23, Richard James (Dick) turned 21 at the same time his mother became ill, Edna May was 19 and Alma Caroline 17, with Jack the baby at only 10 years old.

In her life she found time to help the general work of the Church of Christ, and also gave great help to the Junction Swimming Club.

I knew about Caroline’s involvement with the Church of Christ and am delighted to know this extra snippet of her support of the Wangaratta (Junction) Swimming Club. Was this to support her children or was Caroline a keen swimmer in her youth?

I do wonder about some of the detail in the rest of obituary though. “Her mother and four sisters survive.” This was partially correct. Caroline’s mother Jane Ritchie (nee Martin) lived another nine years in Bendigo, but she had only three living sisters. They were Margaret May RITCHIE (18791-1941) who married Alfred JACKSON, Ellen (Nell) Swanwick RITCHIE (1882-1937) who married Percival Howard THORNELY, and Elizabeth Mabel RITCHIE (1885-1965) who married Charles Henry SHARPE. A fourth sister Georgina was born and died in 1890 at Mt Korong.

I expect in the distress of Caroline’s unexpected death things were forgotten or lost in translation between the family and the newspaper, but Caroline also had three brothers who were very much alive. They were James Gilbert RITCHIE (1880-1959), William Rae RITCHIE (1885-1987), John (Jack) Leonard Leslie RITCHIE (1892-1944). A half brother, Herbert MARTIN (1875-1921) had pre-deceased her.

I’m also interested in the people who took part in Caroline’s funeral as they reflect her community and family connections as well as those of her husband. It is unfortunate that it wasn’t the done thing for women to take an official role in funerals as the friendships of Caroline may have been revealed.

R. J. Moore (Caroline’s second son Dick), A. E. Moore (Caroline’s first son Bert), A. Wohlers (Albert Henry Wohlers – a lifelong friend and neighbour of Caroline’s husband Gordon), and H. Sutton. Who was H. Sutton? This is a name I have not come across before. A Herbert Bailey Sutton, bank clerk was living at 18 Faithfull St in 1931. Harry Sutton, a motor mechanic, was living at 54 Meldrum St in 1934. Given Gordy Moore’s mechanical bent and the interest of several family members in motor cycles, this man seems like a good candidate. A Henry Sutton died in Wangaratta in 1952 aged 74, making him around the same age as Gordy. Another man named Henry Sutton died in 1998 aged 87 which would make him the age of Caroline’s sons. I am hoping that knowledge from the Sutton family will allow the real H. Sutton to stand up.

F. Moore (Gordon’s brother Francis Richard Moore), S. Cordy (Stanley Keith Cordy, an early member of the Church of Christ and the maternal uncle of Ivan Jackel, whom Caroline’s daughter Alma was later to marry), B. Moore (likely Gordy’s brother Albert Arthur (Bert) Moore). H. Morrell is another unknown. A Henry Cuthbert Morrell, cab driver, was living in Chisholm Street in the 1930s and 1940s. Henry was around the age of Gordy Moore, but I shouldn’t overlook that the connection may have been with Henry’s wife Olive Millicent (nee Young) who could have been a friend of Caroline’s. Certainly in 1930 Gordy Moore was a Vice President of the Wangaratta (Junction) Swimming Club at Merriwa Park but a Mrs Moore and a Mrs Morrell were also on the committee together. T. Thornley is likely an error for Percival Thornely, the husband of Caroline’s sister Nell. J. Ritchie could be either of Caroline’s brothers – James or Jack. 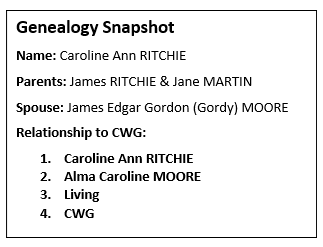