Faking it with FindaGrave

Recently I was alerted to the fact that fellow blogger Janelle Collins had photographed all the extant headstones at Boorhaman cemetery north of Wangaratta.* Janelle’s rellies were John King and Mary Anglim (sometimes Anglam), who came from the same area of Clare in Ireland as my Considine connection, but more about that another time. Janelle kindly uploaded her photos to the website FindaGrave. These images are a great source for researchers of north eastern Victoria and I want to make it clear that the following post is in no way in criticism of the work of Janelle.

While I was browsing Janelle’s images on FindaGrave I noticed a few entries for burials at Boorhaman which had no photos. These were entries created by other people – not Janelle. FindaGrave is an example of a crowd sourced database, where anyone can contribute, and the information can be scrutinised by other members, but if someone thinks an entry has errors, the original creator must be contacted and they can accept or reject changes. There IS a higher authority than the entry creator, but you must go through the protocol of contacting the creator first and then appealing to the support team of FindaGrave if your alteration is rejected, or wait 30 days if it is ignored. Records in FindaGrave can be created by anyone WITHOUT QUOTING ANY SOURCE WHATSOEVER. There is not nearly enough scrutiny off these types of entries.

I was bemused by two of the entries for Boorhaman on FindaGrave with no photos or other evidence. They were for a married couple whom I knew to be buried at Wangaratta cemetery. How did I know that? I recognised their names and used the next best thing to a primary source – a transcription of a primary source – to confirm my suspicions. This is the CD of the cemetery register published by the Wangaratta Family History Society in 2002. Sure, there are the minor transcription errors as expected in a project of this size, and there are problematic entries caused by the poor record keeping in the original registers, but for the most part it is very reliable, and the way it has been arranged it is an incredibly valuable tool.

I studied the FindaGrave entries for the couple recorded as buried at Boorhaman for whom I had ample evidence were firmly planted at Wangaratta, in search for clues as to why they appeared there. The entry for the married couple had a tiny disclaimer right down the bottom, to the effect that it wasn’t certain that the couple were at Boorhaman but it was “likely”. I can guarantee that most people would miss that tiny disclaimer. And how many people who did notice it took that info and ran with it anyway? How many put it in their family trees as fact? After all FindaGrave is a solid ‘source’, right? 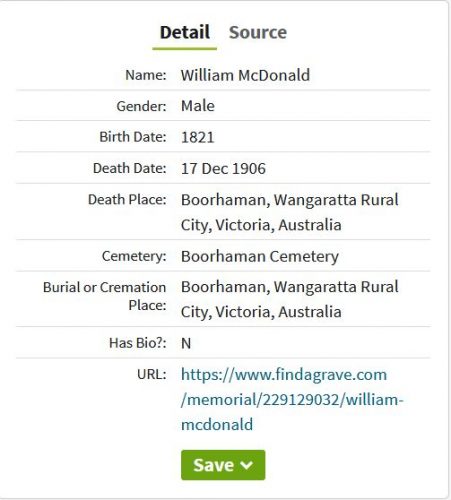 Ancestry record for William McDonald who died at Boorhaman. He is buried at Wangaratta. This entry has been deleted by the creator who DID use a credible (though incorrect) source.

FindaGrave is owned by Ancestry. Entries come up in Ancestry searches as “records”, suggesting a legitimacy that is not always deserved. The image on the left shows the Ancestry “record”. When searching on Ancestry the four categories are “historical records”, “family trees”, “stories & publications”, and “photos & maps”. FindaGrave appears in search results if “historical records” is selected. This is again problematic. The entries CAN be historical records and they CAN be quite legitimate, but they are not always so. ANYONE CAN CREATE A RECORD WITH NO FACTUAL BASIS, yet the dataset that is FindaGrave is presented as solidly sourced, just like any census or baptismal records. If you click on the “source” details in any entry, it does not give an actual source, but a reference to that same entry in FindaGrave. A reference is a pointer to a source, but in these cases there is no real source.

Looking through other cemeteries I found dozens of entries with no noted source at all. If the source wasn’t a cemetery register, what was it? Some entries would be from funeral notices or death certificates but there is no way to tell the entries created on the basis of these solid sources, from the purely fabricated entries. So if old Aunt Mabel thought her grandfather, who died before she was born, was buried at Thoona cemetery, you could create an entry to that effect even though you have no real evidence, and Aunt Mabel is known to have a few roos loose in the top paddock. FindaGrave relies, not on creator’s proving the record, but on others disproving it. In this way fake information is created and held up as a solid resource. Remember what I said earlier about there being a difference between a reference and a source? A reference should be a pointer to a source, and I could put Aunt Mabel as the reference, but it doesn’t mean that there is a solid, reliable source there.

Some of the dubious entries seem to have been based on the reported place of death of the deceased, as shown on Victorian indexes. This is another problem with not using the primary source. An index is just that, and seasoned Victorian researchers know that the place of death on the indexes is often where the death was registered, and not necessarily where the death occured, and certainly is no indicator of place of burial. If your relative died at Everton, Bowser or Killawarra for example, their death may have been registered with the nearest Deputy Registrar in Wangaratta, and it may have been indexed as such. Again, this is faking history and waiting for someone to disprove it.

Then there are the entries, like the one mentioned above for the married couple, that bore the same disclaimer that the creator was “not sure” if the person is buried there. I followed just one creator of these types of entries and found that they had created over 30,000 entries, and roughly 10% of the random sample I chose had no specific reference to the burial and most importantly, included the notation “not sure if buried here”! The cemeteries they had added entries to ranged all over New South Wales and Victoria with potentially 3,000 fabricated entries from this one creator alone! This was truly shocking and makes a mockery of FindaGrave as a source. Who knows on what basis these records were created, but they shouldn’t have been created at all! There is a moral obligation to create correct entries and not to create historical fiction on the off chance that it may be correct. False, or unsubstantiated entries like this may also stop people from looking further and finding the actual burial location. 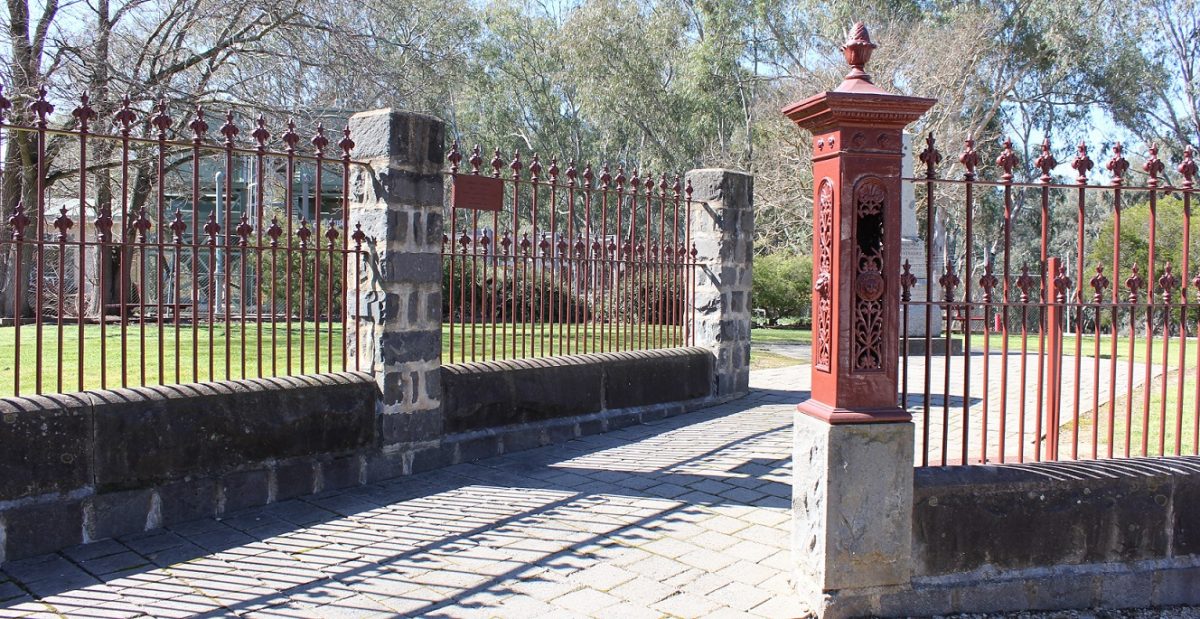 There are also entries on FindaGrave where people have been noted as being buried at the Wangaratta Pioneer cemetery on Faithfull Street, when burials there ceased in the 1850s, and the specific people are registered at the main Wangaratta cemetery on Tone Rd. When I last looked at, and tried to fix up Wangaratta Pioneer cemetery by contacting the creators of the entries, only five of the 45 entries were correctly located. A full 40 of the 45 entries in the Pioneer Cemetery were for burials that actually occured at the main cemetery on Tone Rd. This does matter! It also, again, points out that FindaGrave is NOT a reliable source.

**THIS PARAGRAPH IS AN UPDATE TO THE ORIGINAL POST** Since publishing this post I took a closer look at entries on FindaGrave for burials at Wangaratta’s main cemetery on Tone Rd. To my horror, I found that most were the result of someone uploading the details from the Wangaratta cemetery for every single entry! How do I know this? I have a few examples but I will give only one here. My great aunt Mimi (Jemima Emily Moore) died in January 1962. I have a death notice, her death certificate and a photo of her headstone, along with many family memories. However, an error was made somewhere between the register and the CD, and her death year is respresented on the CD as 1961. The FindaGrave memorial for her also represented the death year as 1961. [This has now been corrected on FindaGrave by myself]. This uploading of data is a blatant and wholesale breach of the copyright of Wangaratta Family History Society. I am happy to be corrected if this data was sold to Ancestry by the society, as is their right, but I suspect this is not the case as the entries were created by a private individual, not by Ancestry or FindaGrave. I don’t believe that this would be an isolated case and that the copyright of other societies has similarly been breached. 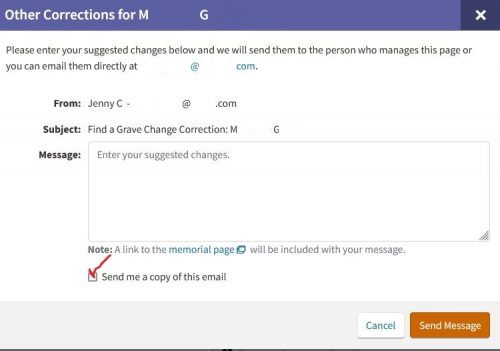 If you locate an entry on FindaGrave that is for a burial noted at the wrong location or some other issue that is not biographical, click on “suggest an edit” then click again at the bottom of the individual profile where it says “Other – Suggest other corrections”. Before you message the creator, remember to tick the box “send me a copy of this email”, as these do not show in your messages anywhere or in “suggestions I’ve sent”, so there is no other record of your attempt to correct the record.

So, there is a distinct difference between entries in FindaGrave created on the basis of headstone images, and unsourced entries on FindaGrave. Although most headstone photos were taken relatively recently, the headstone, which is the actual original source, was created by family members of the deceased, with reference and connection to the cemetery records, even if those records are now lost. Of course there are examples of sensationally incorrect headstones around. I have one in Berwick cemetery where the stonemason has mixed up the death dates of the husband and wife and still it sits there, a thorn in my side every time I see the photo of it. However, headstones are a far better and more legitimate record to start from, than a record created based on downright guessing, particularly when other nearby available sources (such as Wangaratta cemetery) have not been fully interrogated and eliminated. In terms of newspaper obituaries, in my early university days we had spirited debates about newspapers and the type of source they actually were. They are mostly secondary sources, and in the days when newspapers had correspondents write in from outlying areas, the information was second or third hand. Newspaper reports are not infallible so it is sometimes a case of taking each newspaper item and determining the value of it by careful assessment of who wrote it, and under what circumstances. It is not commonplace for a newspaper to make an error on a burial place, though families may have changed their mind at the last minute, or sloppy journalists may have made assumptions.

The moral of this story is that 1/ there is a hierachy of good through to mediocre sources, so use the best you can and don’t assume they are infallible, and 2/ don’t make up entries on FindaGrave! Unless records on FindaGrave without headstone images have an actual, legitimate clearly stated source such as a cemetery register, death certificate or obituary, they are mere fabrications. It is alarming that Ancestry and FindaGrave present these records as facts. I could just as easily create an entry for the burial of Elmer Fudd in my back paddock and it would turn up on Ancestry looking just as important as the legitimate records.

*Photos of Boorhaman cemetery can also be found on BillionGraves and Carol’s Headstone Photos.