George Clark and his unfortunate end

I have written previously about the inquest into George Clark’s death in June 1854 and how it allowed me to put together information to come up with the location and name of the Grape Inn which was owned by George’s brother William Henry Clark (WHC). George Clark’s death at Kangaroo Gap was a sorry end for a man who clearly had a serious problem with alcohol. His death could not have been more public or more humiliating for his family. You can read the inquest at the Public Record Office of Victoria here, but suffice to say that George was found without some of his clothes and animals had mauled parts of his anatomy and his eyes. It must have been horrendous for those who found him, his family, and those who had to sit through the inquest with his body present. No doubt these sensitivities would have played a role in choosing the men who took part in the inquest into his death. Some family members and employees gave evidence of the search for George and finding his body, so they were ineligible to be jurors. Family members and close friends chosen as jurors were more likely to be sympathetic and maintain the privacy of the family, and they were also more likely to be readily available to call on. In this post I will discuss how all the players in the inquest into George Clark’s death were connected.

Richard Clark was was the second youngest brother of WHC (George was the youngest). Richard held a license for the Black Swan Inn at Benalla until around the time of his wife Mary Sparrow’s death in June 1853. He married Sarah Maddock in Melbourne in February 1854, and by 1855 Richard was located back at the Black Swan Inn in Benalla where he also had a flour mill. After Richard’s death in January 1869, WHC was embroiled in a court case brought by Richard’s son-in-law Michael Farrell over Richard’s heavily mortgaged estate.

Samuel Culver, brickmaker, residing Wangaratta: Samuel Culver reported in his deposition that George Clark “was a mate of mine” and they had been working quarrying stone together at Kangaroo Gap, while Samuel was also charged with looking after Clark. Perhaps the stone was destined for the Grape Inn. It is also possible that the Commercial Hotel had been commenced at this stage and the stone was used in that building. Unverified claims have been made that a Samuel Calvert made 100,000 bricks for WHC’s second hotel, (which we now know was the Grape Inn), but the bricks were instead used on the Commercial Hotel. A John Culver was living in Wangaratta in the 1860s through to the turn of the century but I have yet to determine if he was any relation.

Denis Sullivan, labourer, Wangaratta:  Born circa 1812 Kilcatherine, County Cork. Denis was working on WHC’s cattle run looking after horses. He found George’s body but did not know it was George Clark. Denis died in October 1854 and the inquest was also held at the Grape Inn with the finding that he died from a “visitation of God”. He left six children and his wife Margaret (nee Hagan or Heylen) remarried Patrick Canny. Denis Sullivan junior, who was only six years old at the time of his father’s death, went on to marry WHC’s daughter Jemima Maria (1855-1933).

Peter Martin, builder, Benalla: Martin was evidently familiar to the Clarks as he recognised George’s body when it was first found. Perhaps Peter was building WHC’s new Commercial Hotel? He was named as the architect of several public buildings in the north east. But Peter Martin may also have had a personal friendship with Richard Clark, as in March 1859 Peter Martin and Richard Clark were the only two members of the Benalla Church Building Committee, and in March 1861 both men were trustees of the Benalla Cemetery. 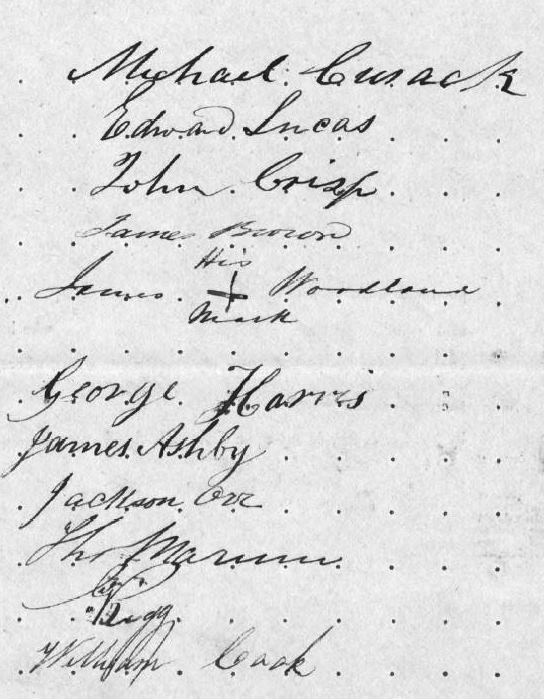 Edward Lucas (1828-1900): Schoolmaster, and acting Deputy Registrar of Births and Deaths in April 1854. Also had a store which doubled as the Post Office. A fellow Councillor with Clark and Cusack in 1863, and a Mayor of Wangaratta.

John Crisp (1819-1861): Was at the Ovens River Crossing Place by at least March 1848 and in early 1849 was advertising his Ovens River General Store. Crisp owned the block on the north eastern corner of Murphy and Reid Streets, opposite what was to become Clark’s Commercial Hotel.

James Brown: Possibly the man who reputedly married Jane McKenzie in Wangaratta in 1859. Jane was the former defacto of George Faithfull with whom she had a daughter. Jane’s circumstances were similar to that of Margaret Considine who had a son to William Pitt Faithfull. I am sure that WHC was in close contact with the Faithfull family as fellow squatters, and through his links with John Moore, the husband of Margaret Considine. Two sons of Margaret Moore (nee Considine) also married daughters of WHC.

James Woodland (c1826-1866): A farrier who purchased allotment 11 of section 2, on Murphy Street directly opposite Ely Street in 1851. When Clark’s Commercial Hotel was built in 1855 Woodland was a close neighbour.

James Ashby: I haven’t worked out who this was yet. If anyone has suggestions please let me know by using the Contact page.

Jackson Orr (c1819-1874): Orr was at the Ovens River Crossing by at least 1845 when his first child was born there. A carrier by trade, he became indebted in 1874 for the sum of £300 to shopkeeper James Dixon who promptly declared bankruptcy. Realising he had been swindled, and believing that he may actually have been fooled into £600 of debt, Orr drowned himself in the One Mile Creek.

Thomas Pierce Marum (1836-1879): A chemist who was born in Kilkenny, Ireland, he regularly moved between Chiltern and Wangaratta. He married Harriet Jane Moore (1851-1928), sister of Clark’s son-in-law William Moore (1845-1908) in 1871. He eventually moved to New South Wales where he was the dispenser at Darlinghurst Gaol.

George Rigg or Biggs: Dr Dobbyn wrote this name as George Riggs on the list of jurors, but the juror’s signature looks more like G. Bigg or Biggs. If the surname was Riggs, was he related to Warren Rigg/s who died after falling from his horse in 1864? Or to Eliza Jane Rigg who was a witness in the Rev Caleb Booth ‘incident’ in 1867? Warren was probably the father of Eliza Jane, and we know he was in Wangaratta in 1856 when he was a juror at an inquest. I don’t think this could be George Biggs who died at Cropper’s Station in October 1867 as he was reputedly aged 28, making him aged only 15 in 1854.

William Cook: Another unknown. William is not part of the family of bricklayer Christopher Cook and Ellen Considine (sister of Margaret Considine). I will have to wait until I can find another mention of a William Cook with a matching signature.