I have been asked to look into the history of a house named ‘Glen Ashley’ situated at 1 Chisholm Street Wangaratta, on the north east corner of Ely Street. Due to changes in land records, and subdivisions, researching this block and house has proven difficult, but let’s summarise what we do know. If anyone can add to the story, please get in touch using the “Contact” page, or leave a comment on this post. 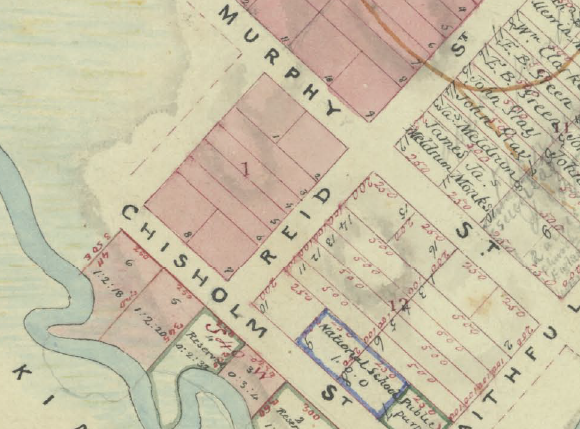 Map drawn by Robert Hoddle, 1849, showing allotment 8 of section 1, as yet un-purchased, and Ely Street un-named.

The block that ‘Glen Ashley’ stands on first appeared on a map drawn by Robert Hoddle in 1849. This two acre block was allotment 8 of section 1 on the corner of Chisholm Street (in pink) and the as yet un-named Ely Street. Patrick Fitzpatrick purchased this allotment from the Crown on 23rd May 1850. David Whittaker wrote in his excellent history of Wangaratta that:

The earliest buildings in Wangaratta were built on the banks of the rivers, close to water. As the town was settled, after the land sales, the supply of water was by tanks and by water carriers. The most famous carriers were the Fitzpatrick brothers, Don, Pat, Jim and Mick; for several years they carted water from the King River at 2/6 a load. They made a fortune. Jim was the principal partner and when a fire occurred in his hut he was found to have £60 in silver in there. He lived opposite the church in Ford Street. 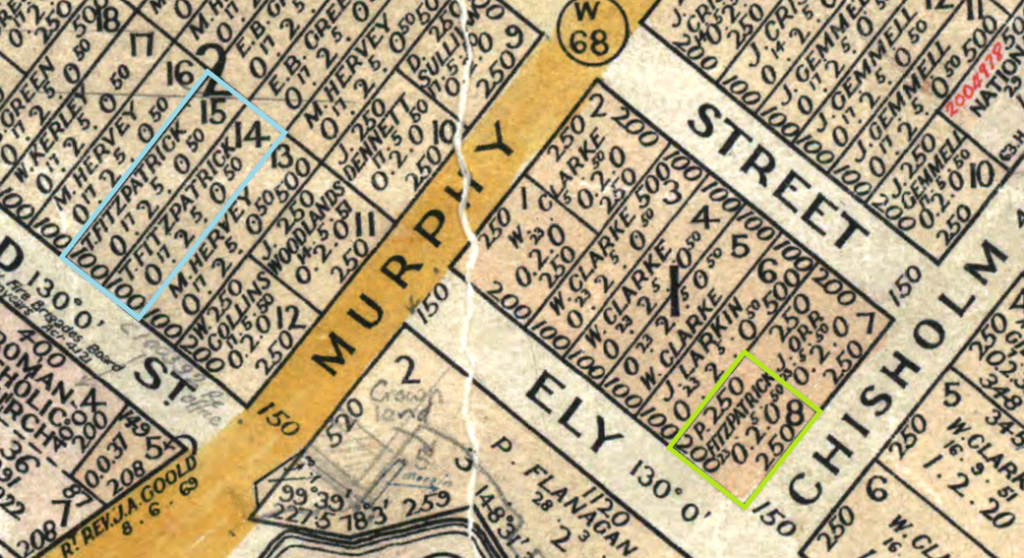 Jim Fitzpatrick did buy allotments 14 and 15 of section 2, in Ford Street opposite St Patrick’s Roman Catholic Church, not far from his brother Patrick’s block which was conveniently located with easy access to the King River. The blocks owned by Jim  were incorrectly notated on plans as being owned by T. Fitzpatrick.

After this time period there is a gap in the history of the block. It is not known if any type of housing stood on the block from the early 1850s. When digitised rate books are available to be accessed at the Wangaratta Family History Group more light may be thrown on this aspect, at least from 1863 when rate records began.

The first mention of the house named ‘Glen Ashley’ was in January 1889 when a Mrs Graham advertised for a servant. Mrs Graham again advertised for a servant at ‘Glen Ashley’ in January 1892. Graham is a Scottish surname and ‘Glen Ashley’ also Scottish. It may be that Mrs Graham was the first owner of this building, and/or that she named it. In Old Tales and Tours, author Edna Harman mentioned that the house had once been a private hospital but no further information has been unearthed yet, such as a name or operator. The next mention of ‘Glen Ashley’ was in early 1912 to early 1913 when Arthur Francis Cyril Kelly, a draper, was living there.

After Mr Kelly, ‘Glen Ashley’ entered into it’s ‘colourful’ phase. In May 1914, L and L Peadthro, advertised their services as “tradesmen’s private enquiry agents and debt collectors” from their residence ‘Glen Ashley’ in Ely Street. Another advertisement at this time mentioned that Lorenzo Peadthro was a piano and organ tuner and repairer. He was recorded at ‘Glen Ashley’ with this occupation from 1914 through to 1916. Lorenzo, who was of Spanish descent, had come from Corowa in 1913. By 1917 he was living back in Corowa. In 1922 when Lorenzo was 60 years old he  was charged with failing to support his children. The description of Lorenzo was that he was known to frequent race meetings and shows, with a blind man named Annetto. Probably busking, Lorenzo played a violin while Annetto played the concertina.

The next phase in this history of ‘Glen Ashley’ is the Evans phase.  This period overlaps with the Peadthro period. We know that the funeral cortege for Evans’ mother Ann (nee Black) left ‘Glen Ashley’ in September 1918, and that Evan Thomas Evans died at ‘Glen Ashley’ in June 1920 .

DEATH OF MR E EVANS. – On Saturday morning the death occurred at his home ‘Glen Ashley,’ Chisholm street, Wangaratta, of Mr Evan Thomas EVANS from internal complications after an illness which extended over many months. The late Mr EVANS was a son of the late Mr and Mrs E EVANS, of Myrrhee, and was born at Bright 43 years ago… Owing to failing health he had to relinquish farm work, and for some time past he lived quietly at his home here.

More recently ‘Glen Ashley’ has been owned by Wangaratta Motors and Central Hume Support Services (CHSS) before once again being back in the hands of private owners.