The 18th August 2017 is the 100th anniversary of the birth of my grandfather Ivan Keith Jackel. I haven’t prepared anything nearly good enough to honour his impact on my life, so instead of attempting a biography or memorial, I am simply calling this an introduction. It will remind me to come back to write something more substantial about the life and influence of this humble man.

Grampa was born in Swan Street, Wangaratta on 18th August 1917, the second child of George Oliver Jackel, an apiarist, and Olive Isabella (nee Cordy). The house he was born in was called ‘El Bethel’ and originally numbered as 133 Swan Street. After the 1960s when the street was re-numbered, it was recorded as 117-119 Swan Street as it stood on a double block. The house was built in 1917 and I have a piece of furniture from it, marked with the the date it was made in 1917. The family must have moved to ‘El-Bethel’ just in time for the birth, from their home near where the levy bank now is along Parfitt Road. It was at this location that the family were flooded out in a disastrous flood in June 1917. Six people were killed in these floods, and I remember as a young child being shown a wardrobe by my great-grandmother who pointed out the water mark in the timber, at least five feet (roughly 150 cms) high.

Grampa’s parents had moved from Taradale, at least by January 1916 when their first son was born in Wangaratta. There is a huge story around their role in the establishment of the Church of Christ in Wangaratta, but Pa Jackel, as George was known, wasn’t a minister or even lay preacher to my knowledge, so it is not clear if their mission to establish the church took them to Wangaratta, or if the opportunity for an expanding his beekeeping business was the catalyst.

The midwife at Grampa’s birth was Mrs Phillips and the medico Dr Docker. I haven’t established yet if Mrs Phillips was a friend or merely a working midwife. Many other women at the time were having their babies at Nurse West’s Hospital, with only a midwife present. The fact that a doctor was present at this birth suggests that the family had a little more money to spend. This is supported by a newspaper article in July 1917 that reported that Pa was one of six people to have purchased a new Ford motor car in the last fortnight. 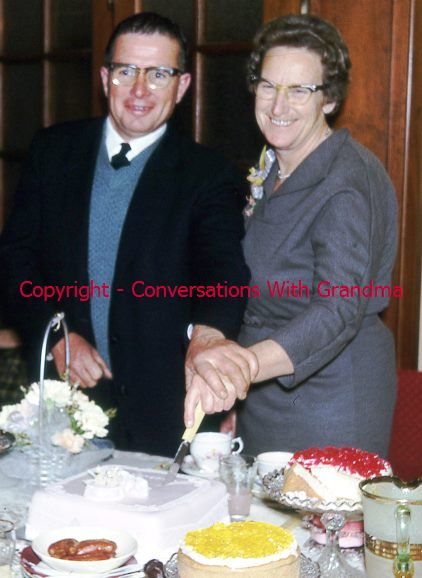 This image is of the 25th wedding anniversary party of my grandparents, held at ‘El-Bethel’ in mid August 1965. I like this image because it shows Grampa looking happy and healthy. I have many other later photos where the effects of his diabetes are showing and his body appears ravaged by disease with his arms far more lean and sinewy than they should be. Viewers of a certain age will notice the sponges topped with cream and jelly in the image. They were a staple part of every family celebration. but more about that another time.

Grampa went on to become a bee-keeper like his father and three of his four brothers. My grandmother, Alma Caroline (nee MOORE), said it was all he ever wanted to do. A practical man who was always making or doing something, he loved nothing better than getting out into the bush and working on the land. So many memories come flooding back with this post – being tested on my counting as a 5-year-old by being asked to count queen bees that he was breeding, sanding down two old drawers that Grampa salvaged from a burnt out building and resurrected as bookcases for me, finding an Edwardian picture frame in his shed and repainting it to fit in a huge photo of me as a two-year old which graced their kitchen for many years to come, helping him extract honey in the stinking hot shed in summer and at 13 years old being given the tricky job of using the electric knife to uncap the honey frames. There are so many more, like watching him study the blossom on trees in order to determine when to move bee hives around, being taken swimming at Lake Mokoan, going to see a huge dam being built (I haven’t looked to see which one it was) and throwing up in the back of the car, wearing my ‘mini-me’ beekeeping overalls out on bee sites and being taught how to smoke and thus calm bees. I watched him make his own bee hives and helped him weigh and mark sacks of beeswax for market. He kept geese and chickens and was a keen rabbit trapper, though I didn’t share his enthusiasm for that fare. Life with Grampa was rich and varied, and on holidays with my grandparents I was always his little shadow. I didn’t have that long with Grampa as he died just before Christmas 1976 at the young age of 59.