This day marks the 140th anniversary of the death of George Moore at the tender age of 28 years. George died at the home of his parents on the One Mile Creek after a four week battle with typhoid fever. It must have been a horrible lingering end for the young man.

George was born on the 23 November 1845 at Hedi Station (otherwise known as Oxley Plains or Edi) on the Ovens River where his father John Moore was an overseer for the brothers George and William Pitt Faithfull. His mother Margaret (nee Considine) also worked on the property.  George’s birth was quite unusual for the time as he was a twin, and both babies survived to adulthood. His (possibly identical) brother was William Moore, my great great grandfather. 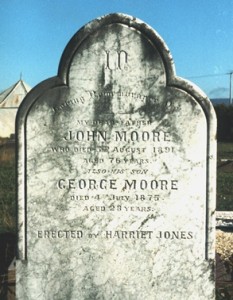 The death of George was a tragedy greater than the loss of a son and brother. George had married Moyhu resident Mary Jane Armstrong less than three years before his death. The marriage took place on 25th September 1872 at the old Holy Trinity Church in Wangaratta and was conducted by William Charles Ford. Witnesses to the union were John Moore junior (George’s eldest brother), and Harriet Marum, one of George’s sisters. Mary Jane was only 17 years old and permission for her marriage was given by her mother Sarah Ann Montgomery Staton. Sarah had been widowed when her husband John Armstrong, a mines inspector died, and had remarried when Mary Jane was around two years old.

On the 1st February 1874 Mary Jane had given birth to George Earl Moore. Now, less than 18 months later she was aged 20, and was a widow with a child to raise. The parallels between Mary Jane’s experience and that of her mother are obvious. Mary Jane continued to be part of the Moore family, with her son George Earl visiting the Moore family until well into the 1930s.

She continued to live at Moyhu, and had seven daughters in a row and finally another son with James. When that son William Dunsmore Fulton was only two years old, in September 1897, James Lonnie Fulton died aged only 40. Incredibly, the cause of death was typhoid. Mary Jane was again a widow, this time with eight children, the oldest of whom was only 16. At least in these circumstances Mary Jane inherited the land at Moyhu that the family lived on. George Earl, by now aged 23, assisted his mother and remained close to her all his life. 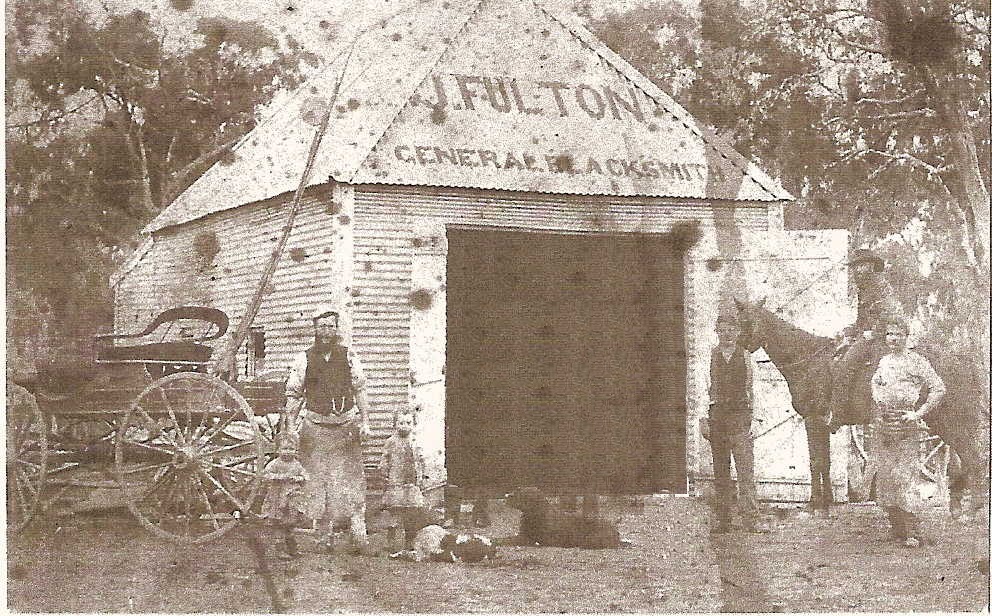 Fulton’s blacksmith shop at Moyhu 1890-1897. Fulton stands on the left with two of his young children. ** See notes below** 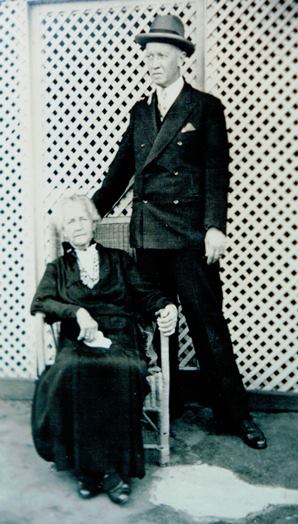 This image of Mary Jane Fulton and her first child George Earl Moore was taken in 1935, probably on the occasion of Mary Jane’s 80th birthday. Mary Jane passed away in 1936. George Earl married Rosalie Salmon in 1901 and raised five children in Melbourne. This image was kindly given to me by George’s son Charles Bertram Moore in 1991.

**This image of Fulton’s blacksmith shop (original held in a private family collection) has been the subject of continued harassment directed at me since 2017, by ridiculously ignorant people with an agenda. The date of the photo had been verified by a qualified historian and genealogist, and an independent photo dating expert, not to mention the fact that Fulton married in December 1879 and is shown here with two of his children. The person who first suggested that the photo contained a person of interest (based on absolutely NO evidence) has been told in great detail, using the opinions and findings of the experts, why this claim is utterly impossible, summarising that the image could not possibly have been taken earlier than 1890. Choosing to ignore all that advice the absurd myth has nevertheless been widely spread. DO NOT contact me if you wish to push this agenda.