Sepia Saturday: The punt on the river and other tales

Sepia Saturday is this week inspired by floods and weather events.

This is an opportunity to touch on some early history of Wangaratta and its relationship with the two rivers that have been so much a part of the town’s beginnings, it’s triumphs, and it’s tragedies.

The beautiful town of Wangaratta is situated on the junction of the King and Ovens Rivers. The King River flows into the Ovens which eventually ends at the Murray River near Bundalong on the Victorian border to the north-west of Wangaratta. 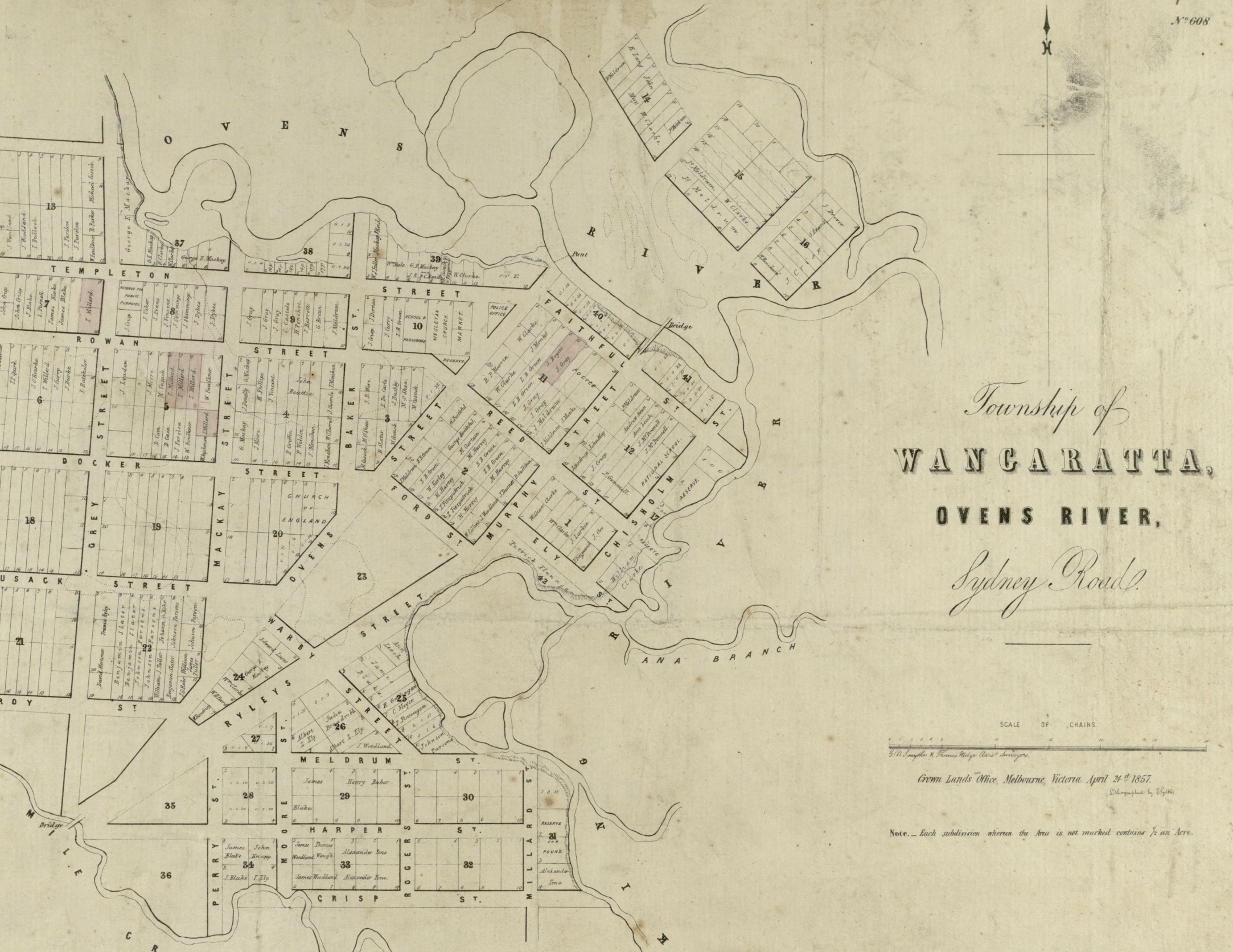 Survey map of Wangaratta by Smythe & Wedge 1857 courtesy State Library of Victoria. The King River runs north-south at the bottom of the map and the Ovens winds erratically across the top.

The early history of Wangaratta and the river crossing towns of Benalla and Seymour on the road between Sydney and Melbourne owe much to the foresight and ingenuity of the Clark family. In the early 1830s John Clark and his wife Elizabeth Jenkins emigrated from Halling, Kent to New South Wales with their adult children John (born circa 1805), Thomas (c1809), William Henry (b 1809) whom we met in Sepia Saturday 219, Richard (b 1816) and George (b 1818). The family spent some time in Goulburn and Yass where they are reputed to have met John Conway Bourke who became the first overland mailman between Sydney and the fledgling settlement of Melbourne in January 1838.

Bourke was privy to important information about the unexplored land to the south of Sydney. He had probably accompanied Joseph Hawdon, and Charles Bonney on at least one of their expeditions and he was involved in a grazing business with Hawdon. Bourke had also taken part in expeditions with Major Thomas Mitchell who in 1838 had travelled south as far as the Goulburn River in Victoria before turning westward to the Grampians. Bourke was probably selected to go on Mitchell’s expedition because of his knowledge of the land. Further research is need to find out if Bourke was on the first overland cattle drive that Hawdon, John Gardiner and John Hepburn had made in 1836 from New South Wales to Melbourne but it seems likely that his ties to Hawdon meant he had knowledge of the land before 1838 .

No matter how Bourke gained his knowledge of what was to become the Port Phillip district of New South Wales, he had passed this knowledge on to the Clark brothers by 1837, long before Joseph Hawdon began the first mail contract. Around this time  the Clark brothers made a strategic decision to spread themselves out along the proposed new route to Melbourne. Three brothers each selected a river crossing to settle at. William Henry settled on the Ovens River, with Richard taking the Broken River which was the next major river to the south, and John the Goulburn River further south again.

Each brother set up an inn and a place to rest horses at the river crossing places. The brothers were astute enough to realise the lack of choices available to the increasing number of travellers on the long (900km) road between Sydney and Melbourne. Each brother built or bought a punt on which to ferry travellers across the treacherous rivers. Not only could the Clark’s charge for comfortable accommodation and food (and grog!) for travellers, they could do the same for their horses and then charge for seeing them all safely across the river on their punt. These river crossing places were the natural site for police camps and other businesses. Quite quickly the locations grew into mini settlements and from these settlements grew the towns of Wangaratta, Benalla and Mitchellstown.

Mitchellstown is now an outpost of Seymour 30 km to the south, as the river crossing at the latter was found to more suitable and the settlement moved over time.

For further information on the early settlement of Wangaratta see David Whittaker’s Wangaratta : being the history of the township that sprang up at Ovens Crossing, and grew into a modern city, 1824-1838-1963; for Benalla see Dunlop’s Benalla Cavalcade and for Mitchellstown see Martindale’s New crossing place : the story of Seymour and its Shire. In most of these works William Henry Clark, Richard Clark and John Clark are recorded as Clarke. This is due to early maps which often incorrectly recorded their surname with an E at the end. I have seen many signatures of these men and they were quite consistent in spelling their name without an E.

This post has turned out to be a bit longer than I had anticipated so the story of William Henry Clark, the punt on the Ovens River and the role of floods and droughts will have to wait for another time.