This post is part of an ongoing series looking at the history of hotels in Wangaratta. Hotels or Inns were interesting places in the early history of towns. When few public buildings existed, they served as official meeting places and were often a hub of gossip and information. They also had legal responsibilities including having to take in injured travellers, have enough accommodation for travellers, and to accept the bodies of deceased people and host the inquest on that body.

The Black Eagle was one early Wangaratta hotel which changed hands and became the Greyhound. The Greyhound became notorious for being a ‘house of ill repute’, housing prostitutes and being the scene of, or connected to all types of dastardly acts. The first owner of the Black Eagle was Albert White who was in Wangaratta from at least October 1864. The Wangaratta section of the Butler & Brookes Ovens Directory of 1866 was compiled by local newspaper proprietor John Rowan in late 1865. He placed an A. White as licensee of the Black Eagle in Roy Street. An Albert White still held a hotel license in the district in October 1871 when he complained about revenue officer John Yoxall confiscating his beer, although the name of his hotel was not stated.

*UPDATE*- So where in Roy Street was the first incarnation of the Black Eagle during the 1860s? 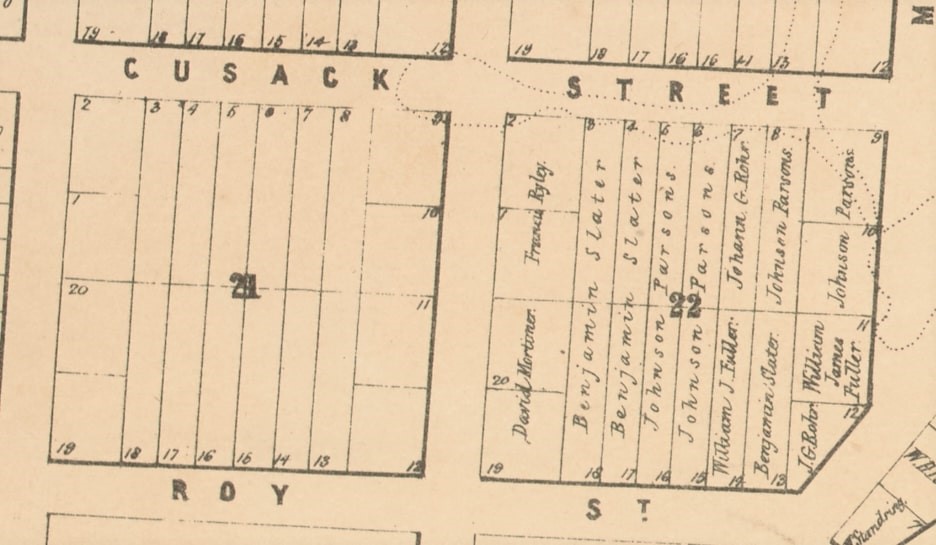 The blocks on the south of Roy Street weren’t alienated from the Crown until the 1880s so are out of contention as the location. Blocks in Section 22, closest to Ovens Street were all sold in 1855 and 1856. Blocks in Section 21 were a mixed bunch. Allotments 1 to 10 in the northern half of the section (along Cusack Street), were sold in 1859, lots 13 to 20 in the 1880s, and lots 11 and 12 on the corner of Norton Street in 1870. This seems to rule out Section 21 blocks as the location of the first Black Eagle, though that is not entirely certain. My hunch is that it was located on one of allotments 12 to 19 in the southern half of Section 22. I have my eye on one particular purchaser of these blocks and hopefully research on his early business dealings will come together to establish a location of the original Black Eagle. 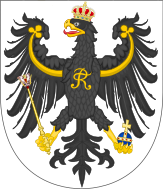 Albert White seems to disappear from the public record from this time, but in fact his name had been mis-recorded right through the 1860s and on occasion, well into the 1870s. Rather than Albert White, the licensee of the Black Eagle was Prussian born Albert Franz Christian WEIDT. The name of the hotel Black Eagle immediately makes sense. A black eagle was on the Prussian Coat of Arms from 1229, and the Order of the Black Eagle was Prussia’s highest order of chivalry since 1701.

In December 1871 Albert Weidt applied to the council for a license for a common lodging house in Cusack Street but it was not recorded if this was granted. The lack of mention of Weidt as a publican at this time suggests he had given up the license of the Black Eagle in Roy Street. Weidt next appeared (as White) at the Licensing Court in Wangaratta in March 1875 where he successfully applied “for a publican’s license for a house in Grey-street, Wangaratta, to be called the Black Eagle Hotel. … The applicant said the house contained eight rooms, and everything was fit for occupation. Constable Ward said the house was clean, and in good order and condition.” There is reason to believe that the Cusack and Grey Street locations were one and the same. See the final paragraph of this post for more information.

In December 1876 John Stephens (aka Stevens – John could not sign his own name, hence the varying representations of his surname) applied for the license of the Black Eagle, but his application was adjourned as the stabling was not sufficient and the previous lessee [Weidt] had “conducted the house very badly”. Stevens was given one month to fix the stables. Weidt and Stevens had entered into a curious arrangement that had fallout very soon after. In May 1877 Stevens claimed to have purchased the Black Eagle from Weidt, and Messrs Docker, who it turned out held a mortgage over the property. The story of the transfer of the Black Eagle from Weidt to Stephens was played out in the Wangaratta Police Court when Stephens charged Anna Maria Weidt (nee Stonelake, formerly Moatt or Mowatt), wife of Albert, with illegal trespass.

John Stephens said he was a licensed publican ; the house is my own property ; I purchased it from Wendt [sic] and Docker ; Wendt joined me in the conveyance ; I told the defendant that I would give her £10 a year, and kept her for looking after the house, the Black Eagle Hotel ; she had no home to go to ; neither has she her husband ; she has been away several days without my consent ; the defendant was a servant of mine ; I have a mortgage on a property of hers ; I bought everything in the house ; I had a bill of sale, and she claimed some things that were not in the bill of sale; she misconducted herself, and I ordered her off, and told her to leave ; she defied me, and said she would send for Franklyn, a colored man, to assist her.

The case against Maria was dismissed with 26 shilling costs awarded against Stephens, possibly because the Police Magistrate thought the case was trivial, he felt sorry for Maria and she had now been warned off, or because he was just as confused with the arrangements as any reader of this might be!

Only one month after Stevens claimed he had purchased the Black Eagle, Maria Weidt had John Stevens before the Wangaratta Police Magistrates Court with a claim against him for wages. And the next month, July 1877, Albert Weidt charged Stevens with failing to pay his board and lodging. This sounds like a confused and tangled arrangement as Stevens’ accommodation, or right to live on the premises as required by the conditions of a hotel license, should have been taken into account in the sale of the license. It might be that Weidt and his wife continued to live on the premises with Maria housekeeping for Stevens, though taking her role as his servant difficult to contend with given her husband’s previous ownership of the property. In August 1877 Maria applied to the Wangaratta Borough Council to have 60 year old Albert admitted to the Ovens Benevolent Asylum at Beechworth as he was “utterly incapable of doing any work, or of contributing to the support of his wife and two children, as he was blind, …[and] she could not support him.” When Albert died at the asylum  in December that year his occupation was described a brickmaker. It seems likely that the arrangement with Stevens was made out of the necessity created by Albert Weidt’s illness and the fact that Maria had two children aged 11 and nine years at the time of his death.

This is technically where the story of the Black Eagle ends. John Stevens had changed the name of the establishment to the Greyhound by December 1877. It wasn’t however, the end of the drama between Maria Weidt and John Stevens over their financial transactions. It seems that both were a continual thorn in each other’s side, both unable to finalise the matter, and both many times before the courts for various other squabbles with neighbours and non-payment of businesses that had supplied them. John in particular specialised in drunken-ness and violence, while Maria specialised in acquiring the property of others by dubious means and failing to pay her mortgages. Maria was again before the court in February 1878 charged by John Stevens with owing him no less than £192 and 18 shillings. Maria countered with a claim the same day, of trespass and damages of £15 in relation to a property on the One Mile Creek. While not about the Black Eagle, the case speaks to the role of the “Messrs Docker” as mortgagee of Maria’s land. Maria Weidt’s claim was that:

she had certain land at One Mile Creek ; mortgaged the land to the defendant ; … it was mortaged on the 14th of October, 1876; the defendant took possession ; … and put on a lock and key without my sanction ; he kept possession of the paddock until it was sold on the 4th of August, 1877 ; … but paid me nothing for the use of it. Mr Langtree said the plaintiff could not pay off the mortgage debt, and the defendant sold it ; there were about 23 acres of land in the paddock ; £20 a-year would be a fair rental, but I have charged him £15. By Mr Norton : I mortgaged the land to the Messrs Docker for £100 the 4th March, 1874; they called it in, and I applied to the defendant, Stephens, to advance the money to pay the Dockers off, in October, 1876 …

John Stephens’ case against Mrs Weidt was also about the One Mile Creek property:

Am a publican, residing at Wangaratta ; in March, 1874, was asked Mrs Weidt to take up a mortgage formerly held by the Messrs Docker: consented to give her £170, on the understanding that she was to employ the land by fencing, Ac. ; paid £107 15s to relieve the former mortgage of £100; paid £62 as at her request, and improved the land ; am about £30 out, without any costs being included ; hold a receipt for the £70. Verdict for £111, or with interest up to the present time, and will have to move to be increased to £170 on certain conditions. Costs to be taxed.

But where exactly was the Black Eagle Hotel aka Greyhound Hotel one may well ask? And what was the story of the Greyhound under John Stevens’ proprietorship? Despite at various times known as at least three different addresses, the hotel never moved. To find out where it was, and all the crime and corruption directly or indirectly connected to the Greyhound you’ll have to read a forthcoming post on the Greyhound. 🙂