The Man Who Wrote His Own Death Certificate

How many of us can claim that the information on a death certificate is as accurate as if the deceased gave the information themselves? The subject of the following post is interesting on a whole host of levels, not the least of which is the fact that he filled out his own death certificate. Many readers will now be wishing it was their ancestor (John Thomas Coates I’m thinking of you!) whilst also wondering how such a thing could occur.

William Edward Barnes was the curator of the Free Library in Murphy Street, Wangaratta from 1902 until 1914. His wife Eliza Ruth (nee Floyd) assisted in the book room of the library. Barnes was also from 1908 until 1916 the Registrar of Births and Deaths. This activity was carried out in a room at the rear of the original library building. When your relatives went to the Registrar to register a birth or death, it was in one of the rooms of the old library building. It was Barnes who shared every joy and tragedy of the townsfolk, and of my ancestors. Near the beginning of his incumbency he registered the death in November 1908 of my great great grandfather William Moore, Clerk of the Wangaratta racecourse and horse trainer. Months before his own death in 1916 Barnes registered the birth of my grandmother Alma Caroline Moore, granddaughter of William Moore and daughter of Caroline Ann Moore. Alma’s birth was a joyous occasion but William had been thrown his horse and met a gruesome and untimely death. Barnes was an essential part of the process that all family historians rely on, and it must have been a very difficult job at times. He could not baulk at hearing about a murder or a stillborn child. He had to congratulate a new father on one hand and then shortly after commiserate with a young widow. He had to hear it all and he had to prevent emotion from clouding his actions as he recorded these important documents, and as he guided informants through the legal process. 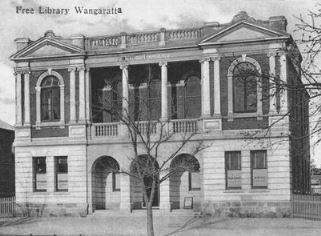 Barnes took his role as Registrar very seriously, as he did his work as curator of the library. After his wife Eliza Ruth (nee Floyd) died in May 1911, 70 year old William seems to have gone down hill. He most likely was both the registrar and the informant for his wife’s death certificate, a truly traumatic thing to go through. He had three surviving children out of five. His only surviving daughter lived at Glenrowan and he had fallen out with his youngest son Edward who lived in Melbourne. It is possible he was also estranged from his oldest surviving son Donald as he enlisted in Sydney in August 1914 shortly after the declaration of what became known as World War One. All of this must have weighed heavily on the aging man and in December of 1914 William resigned as curator of the library explaining that “the duties needed too close attention, and this was affecting his health. He intended to devote his time to carrying out his other duties as registrar of births, deaths and marriages. The resignation was accepted with regret and a minute was placed on the books of the committee of the Free Library “expressing appreciation of the services rendered by Mr. Barnes. Committeemen spoke favourably of the courteous, methodical and painstaking manner in which he had discharged his duties.”

So William had been wearing two hats – that of curator of the Free Library and Registrar of Births and Deaths, both of which required attention to detail and were most fitting for a respectable gentleman in his twilight years. But William had also experienced a colourful past and he had taken part in, and had been an observer of  the life of Wangaratta since at least 1875 – as a photographer. Despite being a photographer in the town for 33 years, very little of his work remains in the public domain, and sadly no self portraits or images of his family.

The following photo is attributed to Barnes but all the other details on the Museum Victoria catalogue are incorrect. State School no.1962 was Docker’s Plains, not Wangaratta. Until late 1877 this school was a Catholic school no. 832 so can’t date before that period (the school number is clear in the on-line version). The clothing of the children dates the image to the late 1870s and Barnes didn’t arrive in Victoria until 1870. 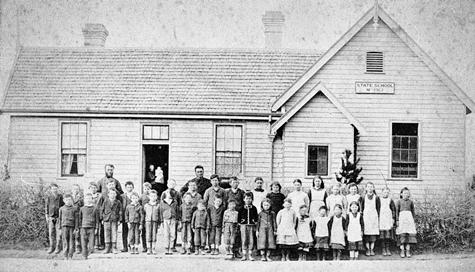 This photo of Bontharambo, the Docker family home, held by the State Library of Victoria is attributed to Barnes (1884-1889) but no further information is available about the image. Perhaps a Bontharambo buff could date the photo by aspects of the building? 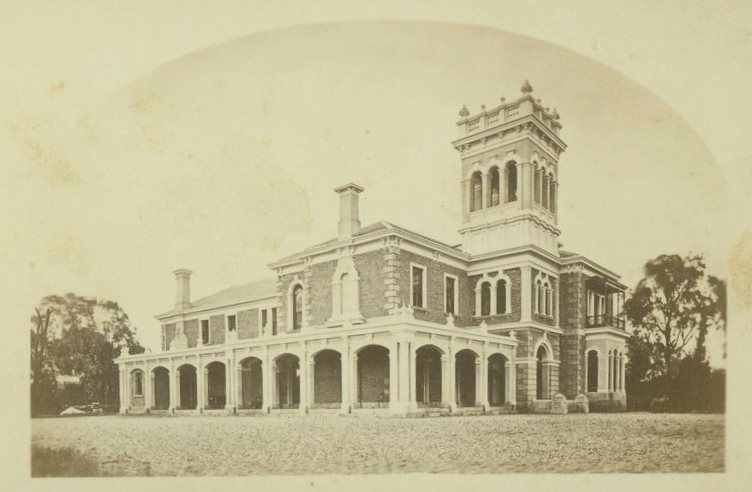 Barnes gained his greatest fame, not from schools, wealthy landowners or ordinary people sitting for their portraits, but from the Kelly gang. Barnes took photographs of the police who played significant roles in the capture of Ned Kelly in 1880. In what have become iconic images, Constable Bracken and Sergeant Steele were portrayed variously as conquering heroes – guns to the fore – and also as gentlemen. Sub-Inspector O’Connor who was in charge of the Queensland trackers chose only to be depicted as a gentleman. The main police in the contingent were posed displaying their weaponry in a manner reminiscent of hunters, but fairly typical for the time. 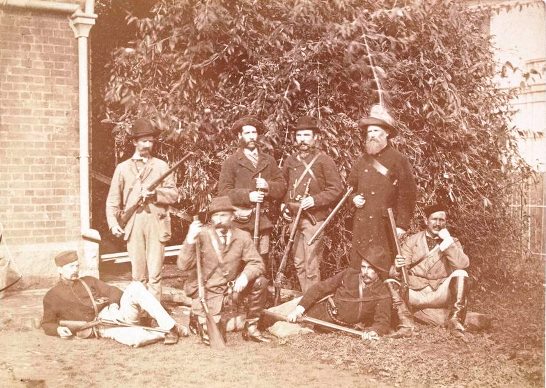 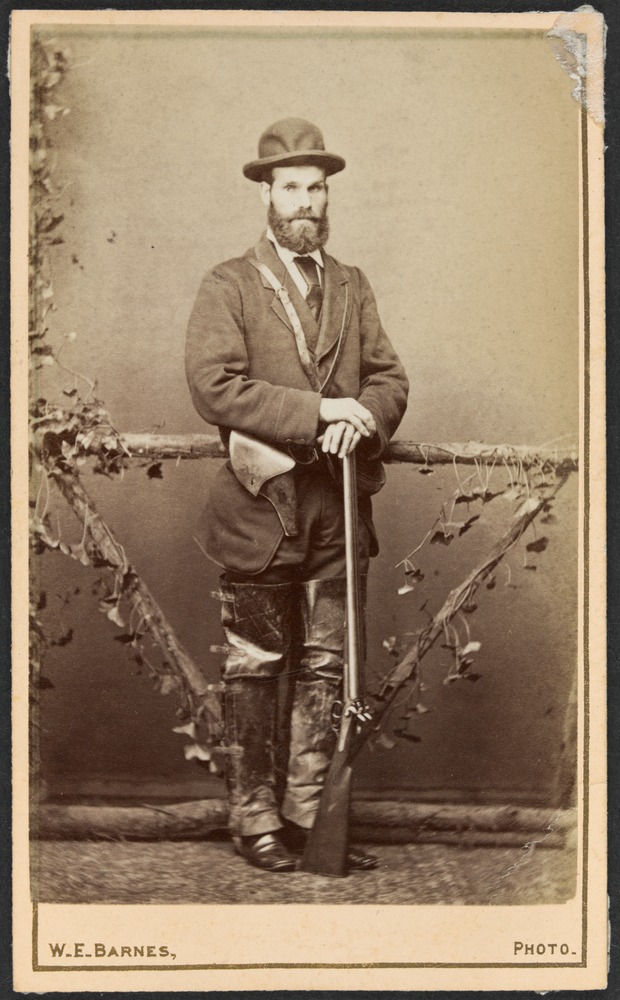 One of Barnes’ more interesting portraits is that of a youthful Steve Hart, a member of the Kelly gang. After the police shootings at Stringybark Creek in 1878, Barnes remembered Hart as one of his subjects and was able to forward police an image of him, taken in 1877 or 1878. 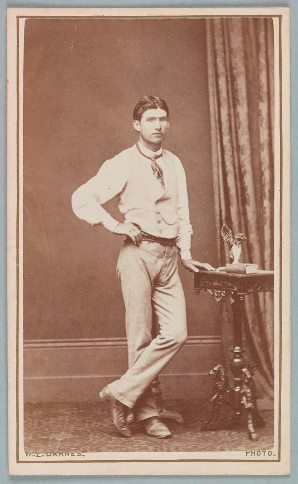 Astutely, Barnes registered the Kelly related photographs with the Victorian Patents Office. These important images survive in the collection of the State Library of Victoria because of this action. Although Barnes must have taken a huge number of studio portraits in Wangaratta from around 1875 until he ceased work in 1908, relatively few survive in public collections. These examples are important, not only as relics of the Kelly era, but of Barnes’ professional work.

On the morning of his death on the 15th June 1916 William Edward Barnes made out a will leaving his £28 estate to his estranged son Edward before carefully completing his own death certificate. The only part of the certificate Barnes appeared to leave blank was the date and place of burial and the name of the registrar, although he had recorded his own occupation as “Registrar of births and deaths.” In the column for recording the cause of death he carefully wrote “gun shot wound self inflicted”.

There is so much more to write about the life of William Edward Barnes. He witnessed and recorded some of the most exciting (and undoubtedly frightening) times Wangaratta saw. Sadly his obituary focused on the manner of his death, largely ignoring his contribution to Wangaratta.

If anyone has any images taken by W. E. Barnes, or any other Wangaratta based photographers I would love to hear from you. I am creating a database of early Wangaratta photographers and need information from private collections to fine tune dates.