Following on from the last Trove Tuesday we continue reading an account of Wangaratta published in the Ovens & Murray Advertiser (O&MA) in January 1863.

The progress of the town, although gradual, is very marked, and those buildings in course of erection are all brick, of which material the town principally consists. The antiquated structures of bark and slab have, by happy degrees, yielded to the ravages of time, and been replaced by more durable specimens of architecture ; a conspicuous instance being the lock-up, a commodious erection, secure and well ventilated ; spoken of in the highest terms by many of its ‘ habitues,’ and recently substituted for a combination of green hide, bark, slabs, nails, and iron hoop ; a structure which, having acted as kitchen to a former resident, was promoted to do duty as a lock-up for some six years, and was one time actually proclaimed a Gaol.

Reading this part of the article one can see how inadequate the protection of residents of the Wangaratta district from criminals was until the early 1860s. Certainly the authorities thought initially that a bark shack was adequate, as prisoners were also handcuffed or chained up inside this ‘lockup’. As the goldfields around Beechworth expanded things changed dramatically. More travellers came through Wangaratta, and the town prospered and grew in line with the burgeoning economy, requiring a way of containing more prisoners in more than a humpy. Wangaratta was also proclaimed the site of a Court of Petty Sessions in 1851. Accommodation for attendees of the court from all areas around the town had to be provided and tenders were called for the same year. 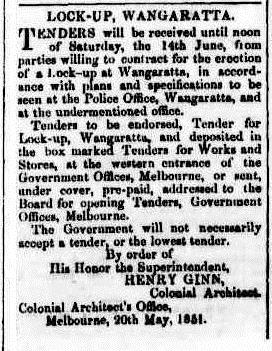 Like the story of the various Court House buildings, the police lockup was a story of false starts. Tenders were called for a lockup several times. In May 1855 F. Ryley was awarded the contract to erect a lockup and in 1857 another tender was awarded to E. Chambers to erect an iron lockup. In August 1858 another contract was awarded to Smith, Banks and Cranston, to build a lockup at a cost of £170. Still the lockup didn’t get built or the one already in existence was beyond capacity and tenders were again called in December 1859. The newspaper report of 1863 indicates that the town wasn’t successful in getting an adequate lockup until around 1862.

The location of the hide, slab and bark lockup building is not known. Having been a kitchen at one time, it must have been closely connected with an early house. The lockup could have been on the same block as the police camp on the corner of Murphy and Faithfull Streets, or at the Police Office. The Police Office was originally on a peculiar triangular piece of land (later absorbed into the market and still later the King George Memorial Gardens) on the corner of Ovens and Templeton Streets. It had a direct line of sight to the punt over the Ovens River, to the market reserve, and in 1863 to William Painter’s restaurant on the site of William Henry Clark’s old Hope Inn. Police could see who was coming and going in and out of the town, and if they were there before the early 1850s, they could observe all the comings and goings from my ancestor’s pub! 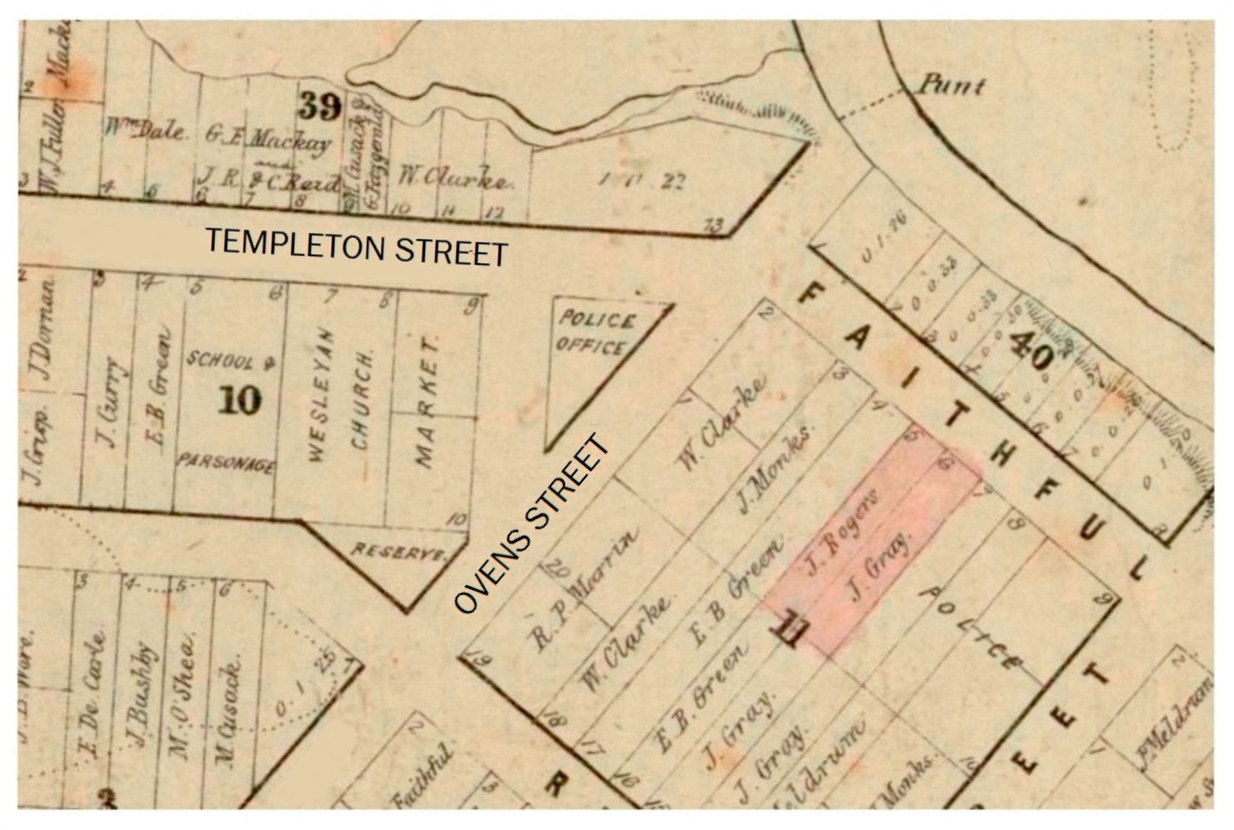 Not surprisingly, the early bark lockup featured in several adventures, or rather misadventures in the town, not the least of which occurred in 1855.

The man Macnamara, whose capture I reported in my last communication, …  effected his escape out of the lock-up here on the same night of his incarceration. It is not known at what hour he made his unceremonious exit ; but thus much is known, that about half-past five o’clock on Thursday morning last, as Mr. Cook was proceeding to his work at Mr. Millard’s new building [Royal Victoria Hotel], his attention, when passing the lock-up was attracted to a hole in the roof of that substantial and truly architectural edifice. Mr. Cook fancying the hole had been recently made, and that some foul play had been at work during the night, naturally inquired of Lieutenant Hare’s* servant, a Chinaman, who happened to be close by, whether there were any prisoners in the lock-up, and, if so, how many ? The celestial gentleman replied ” three,” but on his going to the window of the cage to ascertain if the birds were all there, he to his utter astonishment found that one (Macnamara) had flown. Rose, the lock-up keeper, who was comfortably enveloped in the arms of the drowsy god, was at once aroused, and in less than half an hour Lieutenant Hare and all his subordinates were fully accoutered and seen wending their way in different directions in pursuit of the fugitive. … From what I can learn, he had been securely hand cuffed to a chain in the usual way, and this, I presume, was supposed by the Government at Wangaratta to be quantum sufficit for his safe keeping. Should this be the case, I for one beg to differ with them, and at the same time to tell them that when such characters as Macnamarra are in their custody, and when the interest of their paymasters, the people, is so deeply involved they should invariably place a sentinel on the lock-up, knowing as they do that it is a most miserable and dilapidated fabric, and quite unfit for the retention of the most harmless prisoner. 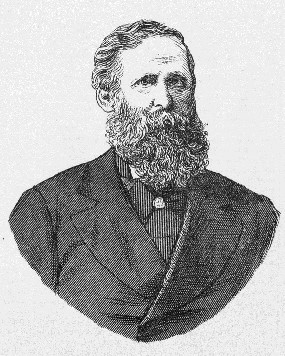 *Lieutenant Hare was Francis Augustus Hare who became a Superintendent of police and was involved in the capture of bushranger Harry Power in 1870 and the Kelly gang at Glenrowan in 1880. Hare’s involvement with Kelly’s capture was symbolic rather than practical as he was wounded in wrist in the first volley fired by Ned Kelly. This 1855 incident would also have looked rather embarrassing on his record. This image of Hare is courtesy of the State Library of Victoria.

The lockup building however, wasn’t the only thing amiss with law and order in the district. The police themselves were sometimes a problem to the residents as shown by this report of January 1853.

This morning the Lock-up-house-keeper of  Wangaratta was charged by the Chief Constable of that place with having been intoxicated while on duty last Tuesday night and with allowing a prisoner in his charge at the time to be drunk also, and at large on the station. The case was heard by Mr. Smyth, Resident Commissioner and Mr. Harper, Police Magistrate. The prisoner was sentenced to forfeit the wages due to sum £4 8s, and to be discharged from his office. Mr Smyth stated in court, that he had received a serious charge of drunkenness and misbehaviour against several of the Wangaratta Constables including the Lock-up-keeper from Lieutenant Christian of the mounted patrol, and that … the matter would be strictly investigated. The establishment of the new police of the Colony will, it is to be expected, bring the constables of the different townships on the road into a better state of discipline. The presence of the expected resident Police Magistrate at Wangaratta will (if a suitable man be appointed) be of great service to the travelling public.

Tenders were also called annually for people to provide rations for both prisoners and police horses. This is a good way of finding your ancestors in early records as this information, if not published in newspapers, was always published in the Government Gazette available online.