Wareena and the Ned Kelly connection

I don’t usually go in for gratuitous mentions of Ned Kelly but he has left a legacy all around the north east of Victoria and south east of New South Wales so can’t be ignored. Mentions of him pop up in the most unlikely places and today’s mention is in relation to a property known as Wareena.

Wareena is a double storey house at 17 Swan St Wangaratta, opposite Wareena Park. The park includes a football/cricket oval and is home to the Wareena Park Bowls Club and the Wangaratta swimming pool. The position of the house, set well back on the block, makes it quite unobtrusive and perhaps not quite as well known as it should be. The prompt to explore the history of this house was a For Sale notice found on Domain.com.au. 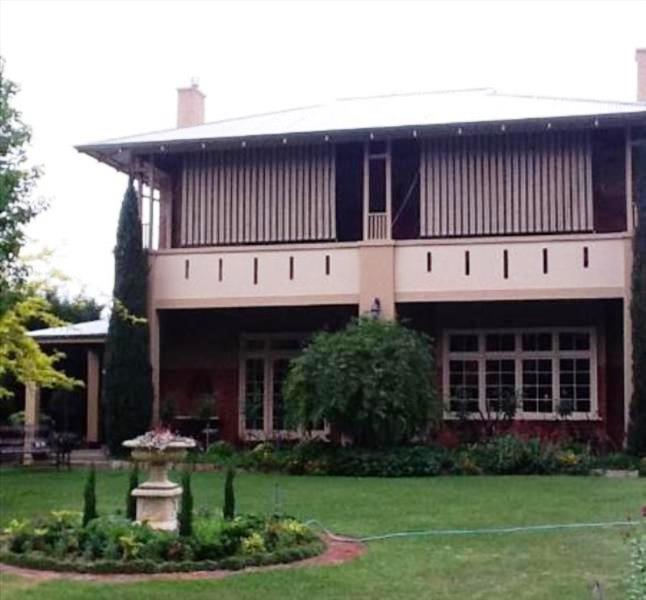 Wareena, was built in the 1920s probably for Edwin Richard Living and his wife Johanna (nee Tuson). Edwin Living was the manager of the Bank of New South Wales in Murphy Street from 1889 until his retirement in July 1918. After his death in 1936 Edwin’s widow Johanna lived in the house until her own death in1943. Their daughters Sylvia Olver (a bookkeeper) and Constance Nellie (a nurse) continued the family connection with Wareena until at least 1949.

The connection of Edwin Living to Wareena Park, his huge contribution to Wangaratta and how he is linked to Ned Kelly is best told in his obituary.

The death of Mr. Edwin Richard Living, which occurred at his home, ‘Wareena,’ Swan-street, Wangaratta, early on Saturday morning, removed one who has been prominent in the business and public life of Wangaratta during the past 47 years. Mr. Living, who would have reached his 80th year next month, suffered only a brief ill- ness. Born at Castlemaine, he was the son of the late Richard Living. He entered the service of the Bank of New South Wales there in 1873, and was afterwards stationed at Melbourne and Adelaide, and then at Wilcannia. Next he went to Jerilderie, and was there when the Kellys raided the bank. As Ned Kelly was leaving he handed Mr. Living a letter, which he requested should be published. In this letter Ned Kelly is reputed to have told his story, and averred that he had been harassed by the police. From Jerilderie Mr. Living went to Ararat and Malmsbury, and then came to Wangaratta in 1889, and was manager here for nearly 30 years, until he retired in 1918. During his long residence at Wangaratta Mr. Living was prominently associated with many public bodies, and had given excellent public service. He was for a long period a member of the committee of the Wangaratta Agricultural and Pastoral Society, being president for seven years in succession. Mr. Living’s active interest in the Wangaratta Turf Club also extended over a long period, during which time he was a committeeman. He was treasurer of the racecourse trustees for many years. Mr. Living was treasurer of the Borough of Wangaratta and its subsidiary bodies, and on his retirement he was appointed Government nominee on the Wangaratta waterworks trust. He was for many years a member of the committee and for some years president of the Wangaratta Free Library, and was a foundation member of the Bowling Club. Mr. Living took an active part in the establishment of the Wangaratta Woollen Mills, and was a director of the company for a long period. He was also chairman of directors of the Wangaratta Flour Mills Co., to which position he gave much time. Mr. Living was always interested in racing, and during his residence in N.S.W. was part-owner of some race horses. Mr. Living leaves a widow, who is the daughter of the late James Tuson, a pioneer of Ararat, one son, Mr. R. M. Living (of Messrs. Murdoch and Living, solicitors), and two daughters, Miss Sylvia Living (Wangaratta) and Miss Constance Living (Melbourne).

You can see a copy and transcript of Edwin Living’s letter about how Ned Kelly gave him the Jerilderie Letter at the Public Record Office of Victoria.