After discussing the Police Magistrate who she considered the upper echelon of Wangaratta society in her memoir Thirty Years in Australia, Ada Cambridge tackled the doctors.

Next to the P.M. in the social scale came the doctors. There were two, English gentleman both. One had emigrated for adventure and the goldfields, and spent good years seeking his fortune by short cuts, but had been glad at last to return to his profession for a living. He was courting a girl of exactly half his age when we came upon the scene, and their wedding was the first smart function that we attended.

This man was Dr William Harte Miller, born around 1823 in Toonagh, County Clare, Ireland to parents of British stock. The Australian Medical Pioneers Index found that Miller’s medical registration lapsed in the late 1860s and he re-registered in October 1869. It also noted that Miller had been around the central Victorian goldfields (Taradale in 1866 and Newstead around 1870-1871) which seems to accord with Ada’s memory that Miller had been a gold seeker. When he became insolvent while residing at St Kilda in 1862 Miller was described as a gentleman rather than a doctor which also supports this, as well as Ada’s contention that Miller returned to medicine as he could not otherwise make a living. Miller had returned to England sometime around 1862 and came back to Victoria in 1865.

Miller’s wife Matilda Duff was indeed much younger than him. When he died in January 1881 his age on a death notice was reported as 50, so a claimed birth year of around 1830. As the Australian Medical Pioneers Index pointed out, if Miller was indeed born in 1830, his first qualification of Licentiate of Apothecaries Hall (Dublin, Ireland) would have occurred when Miller was aged 17, in 1847, and his M.D. qualification in Glasgow in 1850 at the age of 20 years. Miller married Matilda in September 1871 at the residence of Matilda’s father at Northcote, Victoria. Matilda was then aged 28 and Miller did record what was likely a more accurate age of 48 years. This puts his birth at around 1823, making his qualifications at 24 and 27 years seem more reasonable. However, there may still have been some ‘fudge’ room for Miller’s age, given that the age difference between him and his wife was a matter of public comment, and Ada had assessed him as twice Matilda’s age. William and Matilda did not have any children, and Matilda could not be located in records after she applied for her husband’s probate.

Part marriage certificate of William Harte Miller and Matilda Duff. They were married at the residence of Matilda’s father by her uncle, Presbyterian minister Alexander Duff; Victorian Registry of Births, Deaths & Marriages, 1871/3167

The other doctor and his wife were new arrivals from home, like ourselves: they had landed but a month or two before us; and they were our special and best-loved companions and friends. Alas! he too – one of the most delightful of men – died suddenly and dreadfully, shortly before the death of the P.M., also leaving six mere babies and a wife to whom he was perfectly devoted, as she to him.

Ada’s favourite, but ill-fated doctor was James Hester. The Ovens & Murray Advertiser reported his death which occurred on 1st May 1871:
It is with regret we record the death of Dr. Hester, for several years practising in Albury, and latterly following his profession at Wangaratta and surrounding district. The deceased gentleman, whose professional attainments were of no common order, and who was generally esteemed, on account of his kindly disposition and engaging demeanor, leaves a widow and six children to lament his untimely death. Dr Hester, who had only attained 38 years of age, expired at his residence, Wangaratta, yesterday, after a brief illness ; his death is regarded by a large number of the residents in that neighborhood as a public loss.

The report of Dr Hester’s funeral published in the Ovens & Murray Advertiser was in direct contrast to that of Police Magistrate Alfred Currie Wills that we read about in Part 2 of this series:

In accordance with the wishes expressed by the deceased gentleman before his death, the funeral of Dr Hester, which took place on Tuesday, at the Wangaratta cemetery, was of the most simple and unostentatious character, a simple waggonette and a plain coffin being used. About forty persons accompanied the remains to the grave.

Born in Abingdon, Berkshire in 1833, like William Harte Miller, Hester had first come to Victoria in the gold rush years of the 1850s. According to the Australian Medical Pioneers Index (AMPI), he was registered in New South Wales in 1866 where he worked at Albury, before returning to Europe around 1868 and then back to Victoria in 1870 when he settled at Wangaratta. Ada’s recollections of the six Hester children is supported by the newspaper report and other research. Hester’s children were Rosa Catherine (bc 1862), Lucy Susan (bc 1865), Jeffreson William (bc 1866), Mildred Vyner (bc 1868), Sydney James (b 1869) and infant Maud Delicia. But Hester had also taken a trip back to Europe at least during 1862 when he married the mother of his children, Jane Caroline Cuénod Churchill (known as Caroline) in Vevey, Vaud, Switzerland. This trip explains references in the AMPI to him being a registered medico in Switzerland at different times, and is likely where he went between 1868 and 1870.

Ada continued: She came to stay with me after the funeral, and the almost simultaneous birth of my first child – the latter event hastened, it was thought, by the shock and grief that I shared with her.

Ada Cambridge’s recollection that Caroline Hester came to stay with her after the untimely death of James also fits perfectly. Ada’s first child Arthur Stuart Cross was born on the 3rd of May 1871, the day after Hester’s funeral, and two days after his death.

Ada then goes on to recount the tale, told to her by James Hester, of how he met and married Caroline. Remembering this years later for the purposes of her memoir, a few details had become lost in translation. Ada recollected that James met Caroline a few days before he left England to take up a foreign appointment, a whirlwind romance ensued, they were quickly married and Caroline accompanied James to his new position. This was the romantic version it seems as it doesn’t fit with other details. Storekeeper and friend of James, John Hampden Thomas registered the death nine days after James died. No doubt equipped with a written list of the details of James’ life as given by Caroline, the Swiss marriage around 1862, and names and ages of the children were given. John also recorded that James had been in New South Wales for two years and six months, and in Victoria for 10 months, although these times might not have been sequential.

Ada clearly looked up to Caroline. “She was the most uncommon woman I ever met, as she was one of the most adorable. Superficially, both in face and figure, with the exception of her beautiful hands, she was quite plain, and absolutely without trace of conscious fascination or coquetry.” Ada’s adoration continued. “Even the little ones in the nursery could put us to shame in respect of their cosmopolitan experience. It filled me with envy to hear them chattering their pretty baby French to their Swiss nurse.”

Like the widow of Alfred Currie Wills, Caroline Hester held a sale of her furniture in February 1872. This was probably because she was moving to smaller premises. Her husband left no real estate but he did have £350 in a bank account and was due a large debt of £400 by an Oxfordshire resident, and a £62 debt from Caroline’s family in Switzerland for goods he sold them. Hester’s Will is another clue of the family’s cosmopolitan life with it being signed in December 1865 at Point de Galle, Ceylon. Caroline went on to marry slightly younger bachelor Thomas Francis Waller, in South Yarra in January 1874 with whom she had two more children in New South Wales. She was then residing in St Kilda. Ada termed Waller “not-too-well-off“, despite being a stock and station agent and son of a barrister. Her husband George Cross described him as, having “saddled himself with the almost penniless widow and her six children did by that act the best day’s work for himself that he had ever done or was likely to do.” 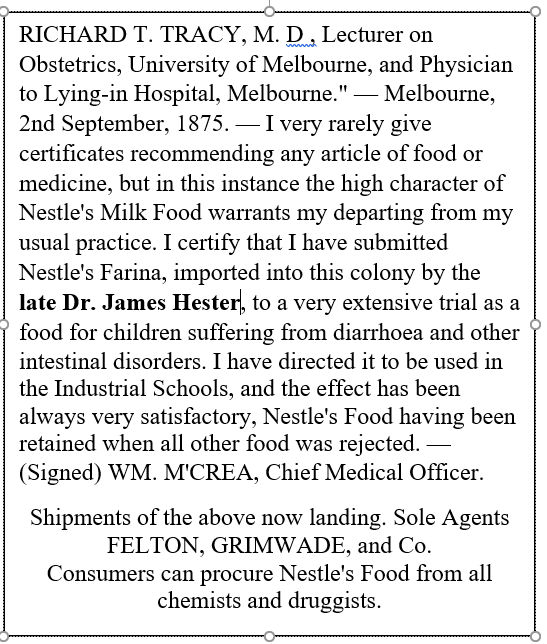 Years after his death James Hester’s name was still being used, perhaps because of his good work, but most likely to make someone else money [see newspaper advertisement on the left]. If James was instrumental in seeking out new food sources for infant health, in a time of high infant mortality, it is a pity he was not given credit in his lifetime. This is undoubtedly the Dr James Hester who died in Wangaratta. Henri (or Heinrich) Nestlé lived in Vevey, the same Swiss town in which Hester’s wife Caroline was born.

Like Alfred Currie Wills, James Hester’s grave can only be located within a group of three in the Wangaratta cemetery, no other family members are buried in the cemetery and he has no surviving headstone.

**All quotes from Ada Cambridge in this series of posts are from Thirty Years in Australia, available from the Hathi Trust Digital Library https://hdl.handle.net/2027/uc1.$b566133. This post refers to pages 38-39.

Follow along with the next instalment in Ada’s memoirs here.