William Henry Clark and his hotels – a new chapter

It’s not often that one is thankful that a person died in such gruesome circumstances that an inquest was held. This is one of those exceptions and I apologise to my four times great uncle George Clark for the happy excitement his inquest generated. George died a gruesome death in June 1854, only three months after he was a main witness at the inquest into the death of his partner Eliza Armstrong. The exciting aspect  was not the circumstances of George’s death but the location of the inquest. This one snippet led me down a rabbit hole of research that joined a lot of seemingly unconnected dots. The research revealed a previously un-named hotel owned by George’s brother William Henry Clark. William owned hotels in early Wangaratta, with the most well known being the Hope Inn and later the Commercial Hotel. As hotels were the place of choice to hold inquests in those days, it was only natural that George’s body would have been taken to his brother’s hotel, and the inquest held there. While it was not stated that the hotel where the inquest into George’s death took place was owned by William Henry Clark, circumstantial evidence suggests that it was. The inquest was conducted by the town’s young doctor and coroner, William Augustus Dobbyn, who was well known to the Clark family, but this is hardly evidence, as Dobbyn would have conducted all inquests. The jurors however, were a cast of friends and relatives of the Clark family that leave me in no doubt that the inquest was held in William Henry Clark’s hotel. I’ll reveal more about the jurors in another post about George Clark’s death.

Before I reveal the name of this hotel, however, I’ll take readers on a tour of all the pieces of information on William Henry Clark’s second hotel that came together after studying George Clark’s inquest.

In her book Wangaratta: Old Tales & Tours , created with the assistance of her friend Judy Bassett, local historian Edna Harman said on page 99:

William Clarke [sic] lost his license for his Hope Inn, down at the original river-crossing in the early 1850s (where the Sydney Hotel stands today). He began a new hotel on the corner diagonally opposite, then abandoned the site. Rain-water filled the cellars: and the government was really going to build a bridge between the two high river banks at the end of Murphy Street. The main road would by-pass his hotel.

This suggests Clark’s second hotel was short-lived. Several things lend support to Edna’s information. In April 1852 Clark’s application for a license for the Hope Inn was withdrawn due to his absence. It is not clear if he was residing on his Ovens Crossing Place cattle run, if he was away in another colony or perhaps on a visit back home to Kent, England, or even if he was merely ill or forgot to turn up to court. Perhaps this was just a temporary glitch and we may never know if the license was renewed soon after or if it lapsed. No newspapers specifically covered north eastern Victoria in the early 1850s (the Ovens & Murray Advertiser was launched in January 1855), and reports of licensing were unfortunately infrequent in Melbourne-based papers. But perhaps Clark was looking further afield at this stage. He didn’t obtain freehold of the site of the Hope Inn until he secured it under pre-emptive right in October 1857. It is therefore not surprising that his enthusiasm for an old hotel on unsecured land may have been waning by 1852. And as Edna mentioned, a bridge was not built across the Ovens River until 1855 so it was a game of politics and gambling until the site of the  bridge was revealed. 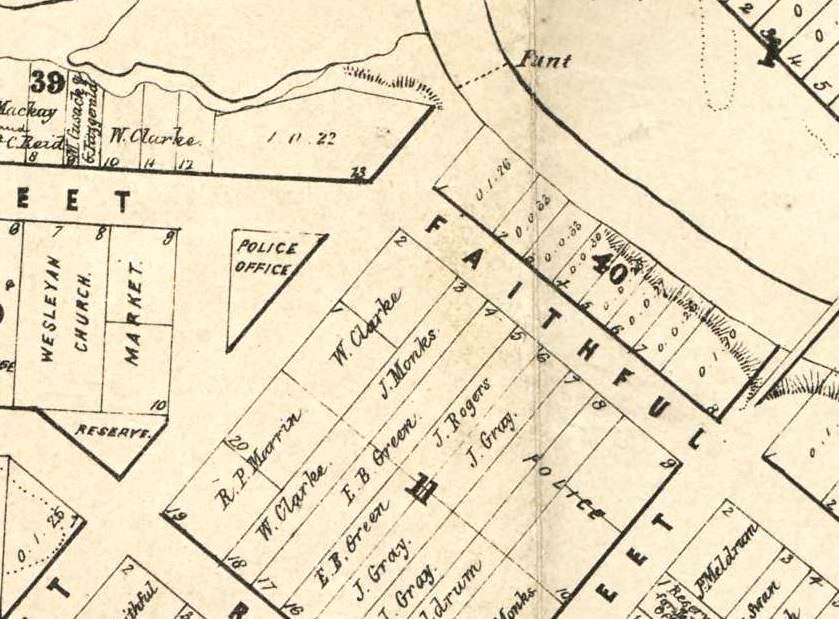 In the 1906 obituary for local builder Samuel Ashworth, one of the principal contracted carpenters of Clark’s Commercial Hotel, the Ovens & Murray Advertiser commented that “It may be interesting in connection with the erection of this hotel to recall the fact that the site first chosen for it was where Mr. T. Laidler’s residence now stands, opposite the old ” punt,” and excavations were even made for the cellars.” The T. Laidler mentioned was Thomas Laidler who was in partnership with John Dodsworth in the Wangaratta Coach Factory in Faithfull Street until 1893. Laidler was also an undertaker and possibly the town’s first Ford motor car dealer. An early 20th century hand drawn map of Faithfull Street shows Laidler’s Livery Stables and Motor Garage, and later the expanded business known as Ovens Motor Garage on approximately allotment 3 of section 11 which is close to the corner of Ovens Street. This was a block once owned by William Henry Clark and it suggests a site for his second hotel on the corner of Ovens and Faithfull Streets. The obituary even mentions the cellars that Edna Harman noted and the punt that can be seen in the 1863 map above. No mention is made of this being the site of the well known Hope Inn. It must be Clark’s second hotel.

Ashworth’s obituary went on to state that “the licence of the old Sydney Hotel, or Hope Inn, as it was then called, was transferred to the Commercial Hotel when it left the hands of the contractors in 1855, and the old hotel became a private residence for several years.” This statement confuses rather than clarifies the issue. The building that was the Hope Inn was burnt down in December 1859 and the Sydney Hotel wasn’t built until around 1864 so they were never one and the same building, although located on the same site. I believe the comment is about the Hope Inn after it was de-licensed, although it is possible that Clark’s second hotel was also used as a private residence for some years. Either way, it doesn’t really detract from the location of Clark’s second hotel and it does support the demise of the Hope Inn around the mid 1850s, well before William Painter came on the scene with the license of the Sydney Hotel. 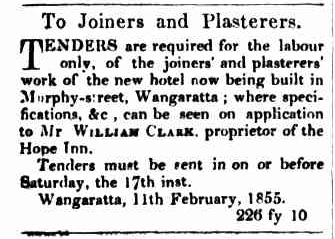 Building of the Commercial Hotel on Murphy Street was well under way by the 10th February 1855 when Clark advertised in the Ovens & Murray Advertiser for tenders for the joinery and plastering work. His advertisement suggests that building had commenced in 1854, and Clark was back using the (presumably licensed) Hope Inn as his home base. His second hotel opposite the Hope Inn had evidently been abandoned and all but forgotten. 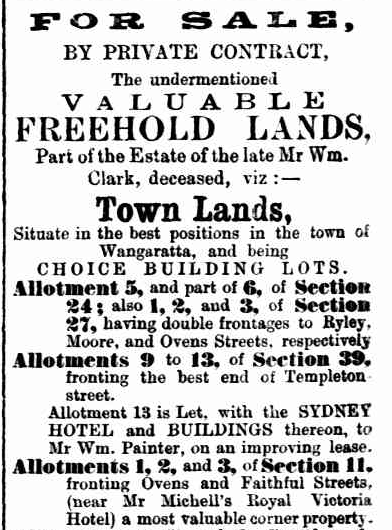 After the death of William Henry Clark in April 1871, his huge estate had to be dealt with and many Wangaratta town blocks were sold, being advertised firstly by private sale and then by auction. The blocks diagonally opposite the old Hope Inn that were in Clark’s estate were allotments 1, 2 and 3 in section 11 [see above map]. Clark had purchased allotments 1 and 2 at land sales in June 1849, (along with allotment 18 that gave him access to Reid Street), and later added allotment 3 giving him additional frontage to Faithfull Street. When these properties were first advertised for sale by Albert Ely in March 1872 [see advert on left] , the descriptions are illuminating. Of note is that the land on which William Painter had his Sydney Hotel, and was the site of the old Hope Inn, was leased from Clark and not owned outright by Painter.

When the blocks were again advertised, but this time for auction in May 1872, more detailed descriptions throw further light on the exact block that Clark’s second hotel was likely located on, and the potential that Clark saw in the block. [see advert on right] By this time, allotments 1 and 3 of section 11 had been subdivided for small businesses, as had allotment 18. Untouched was allotment 2 of section 11, directly on the corner of Ovens and Faithfull Streets. The description of this block perhaps reflected Clark’s thwarted plans from almost 20 years prior.

Lot 8. — Allotment 2, Section 11, having frontages of 132 feet to Faithful-street and 165 feet to Ovens-street,with a right-of-way. This half acre of land is admirably suited for a first-class Hotel, being at the corner of a large stream of traffic to and from the Ovens Bridge and the Railway.

So it seems that there is no doubt that Clark had a hotel between the time he had the Hope Inn and the Commercial Hotel, that it was located directly opposite the old Hope Inn (and opposite where the Sydney Hotel stands), and that it was on allotment 2 of section 11. He probably only held this hotel for a short time in 1854 (at least between June and October) before returning to the Hope Inn.

But what was this hotel’s name? Getting back to poor George Clark’s tragic end, his inquest, and that of Denis Sullivan held in October 1854, are the only two places that I have found the name of Clark’s second hotel recorded – so far.

The name of the hotel was the unimaginative … 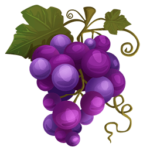 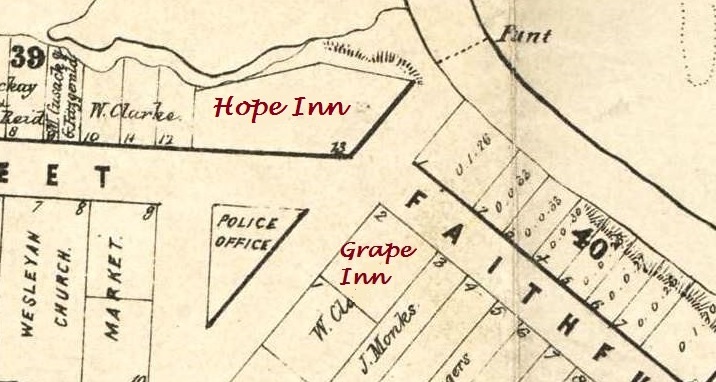 ** I thank my friend Lenore Frost for urging me not to dismiss the name of the hotel recorded at George Clark’s inquest when it at first made absolutely no sense to me, and to Dr William Augustus Dobbyn for writing the unmistakable name of the hotel so many times throughout the inquest that I just had to heed Lenore’s advice.