William Moore – death of an “honorable and meritorious” man

No one really knows how William Moore died. In the dust, noise and confusion that erupted around the movement of a mob of horses from the Wangaratta Sale Yards through Ovens Street to the railway station, no one actually saw the event that caused his death. On that Saturday morning in November 1908, William’s riderless mount was noticed amongst the mob of horses and another drover turned back to find William lying on the footpath bleeding profusely from a head wound. It is presumed his mount stumbled in the dust when stepping onto the footpath and threw William onto the bluestone kerbing. Twenty minutes later he was dead.[1]

So ended the life of one of the district’s earliest residents and perhaps finest horsemen [2]. Born at The Hollow Station at Hedi (later Edi) on the 23rd of November 1845, William was a twin to George, sons of John Moore and Margaret Considine.[3]. As a child William lived at Hedi, before his family moved into Wangaratta to settle.[4] Following in the footsteps of his father, William became a horse breaker and drover, and soon after he turned 22 years old he was appointed  Clerk of the Course at Wangaratta.[5]

On the 1st of May 1872, William Moore married Alice Rebecca Clark (known as Rebecca), a daughter of William Henry Clark, at the Trinity Church, Benalla.[6] The reason for their marriage taking place at the Trinity Church, Benalla, is unclear. Both parties gave their present place of residence as Benalla, but usual place of residence as Wangaratta. Rebecca was under-age (she was 20), but no evidence exists that she was pregnant, as the couple’s first child was born exactly nine months later[7]. Witnesses at the marriage were Rebecca’s 16 year old sister Jemima Maria, and her maternal grandfather Jonathan Harris, who lived at Benalla.

William eventually purchased a portion of land on Three Mile Creek in the Parish of Wangaratta South next to his father’s property where he built a timber home of five rooms.[8] 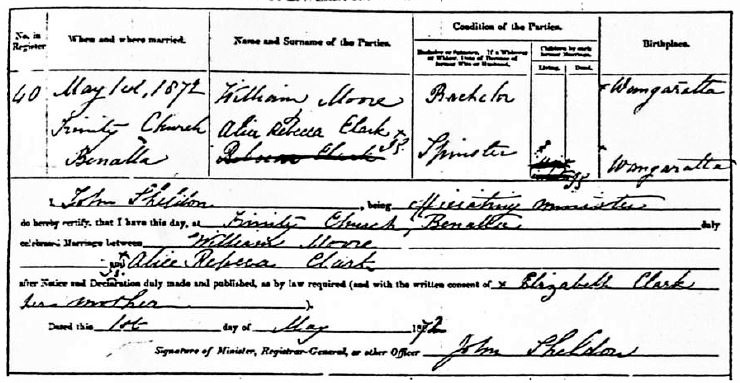 Two of the couple’s first three children were born at Benalla, and a fourth child at Greta. William worked for John Bristow Docker, who owned the run Myrrhee from around 1878.[9] It seems logical that Benalla was the closest town to the property and where the young family would go to register the births of their children. Interestingly Rebecca had a daughter named Alice Rosetta (or Rose), to an unknown father in 1869. The birth of Rose was also registered at Benalla.[10] 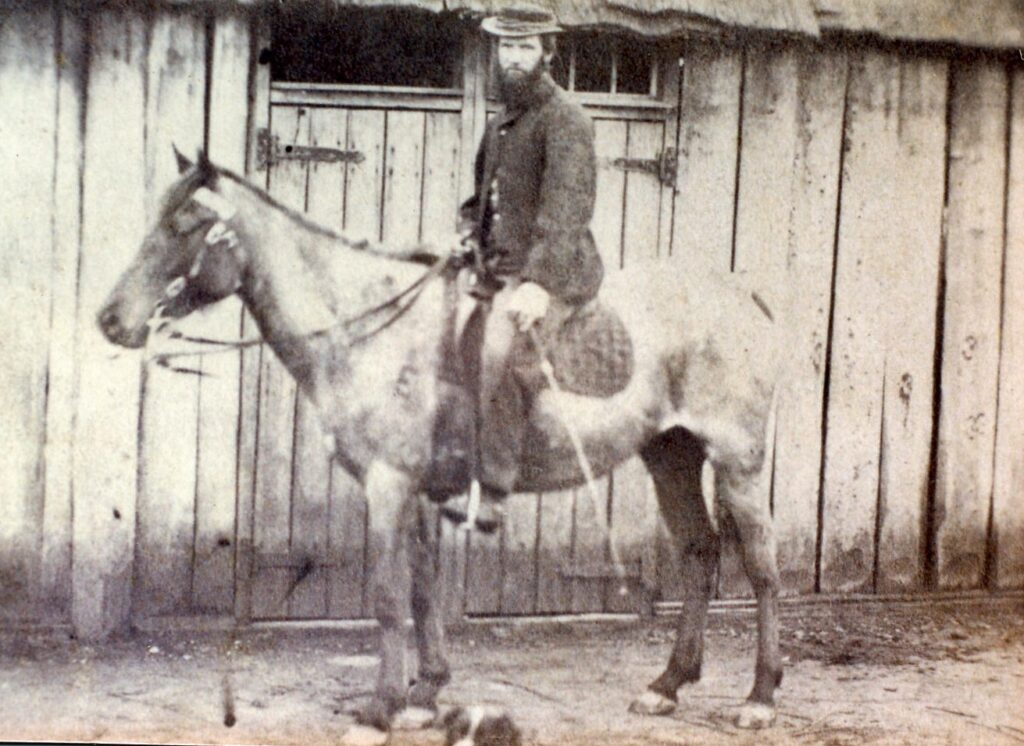 An indication as to the esteem William was held was published in the Ovens & Murray Advertiser in January 1902, six years before his death.

A Long Service Record.— It is not many racing officials who can even approach the record achieved by Mr. William Moore, who as Clerk of the Course for the various race meetings at Wangaratta, completed his 34th year of office on the 8th inst., never having missed a single meeting during that period. Mr. Moore has deservedly gained the reputation of having always been courteous and obliging, and it has been  suggested that the members of the racing, clubs might mark their appreciation of his services by presenting him with a suitable testimonial.

Although newspaper records state that an enquiry into William’s death was not deemed necessary, his death certificate states that he was buried by order of the coroner, and his death was registered by the Constable present at the enquiry.[12] Unfortunately as this was not a formal inquest, no records survive.

William Moore had become known as one of Wangaratta’s favourites, not because of his public image, as he shied away from any involvement in public life, but for his quiet, honest and unassuming nature. Such was his reputation and renown that a grandson born two years after his death could in the 1990s attest to the amount of public grief at his loss.[13]

The two obituaries of William that appeared in Wangaratta papers in 1908 attest to his ability with horses and cattle, and his quiet nature when breaking in horses. This attitude kept him employed for thirty years with various large property owners around the district such as the Dockers of Bontharambo and Myrrhee, and Dominic Farrell of The Hollow at Edi.[14]

Several quotes may used to illustrate William’s character and the esteem held for him by the people of Wangaratta. These obituaries recalled “a splendid horseman”, of how William was “always most courteous and obliging and was respected and esteemed by all who knew him”.[15] The North Eastern Despatch lauded his “exceptional worth as a stockman”, his “excellent character, and [that] he was never known to wilfully do an injustice to anyone”.

“.. the familiar name of ‘Billy’ Moore will be long remembered as conveying all that is honorable and meritorious in connection with stockriding and droving.”[16]

The people of Wangaratta proved their respect in a substantial way. John Sisely, the Mayor of Wangaratta, and Daniel Hugh Evans, a J.P. and former early councilor, opened a subscription for the purchase of a monument over William’s grave[17]. Today a magnificent obelisk stands guard over the Moore family grave in the Church of England section of Wangaratta cemetery. This silent testament to a humble man reads:

“Erected by his many friends in memory of William Moore who was killed through his horse falling 14th November 1908 aged 62 years.

A native of the district.

A kind and generous friend”.

*** This is another of my old university assignments. It is over 20 years old so corrections may be made and a lot more written about this man in posts to come.

[3] Family bible of John Moore, in the possession of his great-grandson, Albert Edgar Moore.